The Intaglio Mint issues a wide variety of silver products for sale in popular weights that include 1 oz and 2 oz silver rounds. Each collection from Intaglio focuses on a different theme, but you’ll find that the ancient world is particularly prominent in the design series from the mint. The Latin Allure Series is a broad collection with designs that embody ancient concepts or mottos. One of the most recent issues in this collection is the Morte Prima di Disonore silver round. Learn about the history of this motto and see how Intaglio Mint brought it to life with distinctive imagery in this week’s blog post. 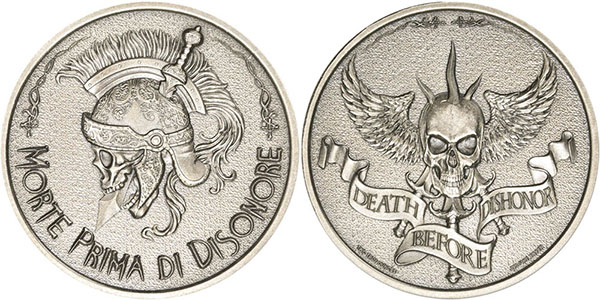 Both the obverse and reverse designs of the new 2 oz Morte Prima di Disonore Silver Round capture the brutal reality of the idea that it is best to meet death rather than live with dishonor attached to one’s name. The obverse side of the silver round features the image of a human skull in left-profile relief wearing a Roman soldier’s helmet. There is a Roman broadsword, the preferred sword of the Roman Army in hand-to-hand combat, that pierces the top of the helmet and skull and exits through the open jaw. The motto “Morte Prima di Disonore” is inscribed along the bottom rocker in an eerie text.

On the reverse side of the Morte Prima di Disonore Round, you’ll find Intaglio Mint’s unique modern take on the concept. A human skull is featured in front-facing relief with three daggers piercing its form from the bottom and out through the top of the skull. The skull is backed by a set of wings and there is a ribbon wrapped below that reads “Death Before Dishonor” in an English translation of the Latin phrase.

The Concept of Death Before Dishonor

In the ancient world, an individual’s honor was held in greater regard than life itself in some cases. For example, warriors and generals often viewed surrender or other failure in battle as a greater disgrace than fighting to the death in a losing effort. In Ancient Rome, Catiline was a Roman politician who urged followers to adopt this concept in an effort to overthrow the Roman Republic of the era to help establish a Roman Empire instead.

Known in Latin as Morte Prima di Disonore, Death Before Dishonor is has evolved over the years in countless other cultures. For example, the Samurai warrior class of feudal Japan had their own form of death before dishonor known as Bushido. Rather than live with the perceived stain of dishonor on their name, Samurai warriors would take their own lives to restore a sense of valor and reputation.

If you’ve followed the previous releases of Intaglio Mint silver rounds, you’ll notice there are many other innovative designs inspired by the ancient world. The Molon Labe Series of silver rounds focuses on the bravery of the Spartan warriors from Ancient Greece, while other Roman-inspired designs include the Memento Mori release.

The 2 oz Morte Prima di Disonore Silver Round is currently available for you to purchase online from JM Bullion. If you have any remaining questions, our customer service team would be happy to help out. You can reach them at 800-276-6508, chat with them live online, or simply send them an email. Don’t forget to follow us on Facebook and remember to check back with the blog each week for exciting looks at new products coming to our catalog.