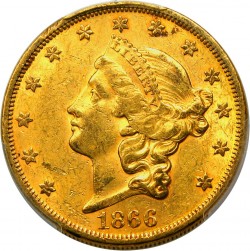 For collectors, the prospect of purchasing one of these coins is a tricky one because the condition the coin is in is always the subject of concern. Because these coins were minted prior to 1900, the reality of the matter is that they are not always going to be in the best condition. Because of this, you will see collectors pouring over the surfaces of the coin looking for even the smallest imperfections.

Normally, a collector who is looking to purchase one of these coins will have it sent away for grading. Understanding that this is an expensive process, we have provided below an outline of the different popular coin grades and their characteristics.

Uncirculated: If a coin is graded as being Uncirculated, this means that it has never been placed into circulation. These coins will look pristine and as though they were just minted. For collectors, these types of Walking Liberties are the most preferred because of their pleasing aesthetic nature, but are also some of the most expensive.

Fine: If a coin is given the grade of Fine, this means that it was circulated for a good amount of time and incurred a decent bit of damage during that time. You will notice that the surfaces of these coins have been worn down a good bit and are devoid of the texture you will find on coins of higher grades.

Good: If a coin is receiving of a Good grade, this means that it has received the lowest grade a coin can get. These coins will be almost completely smooth to the touch, and the imagery and inscriptions on the coin will have faded as well. These are often the most inexpensive coins on the market, but are still a great addition to any collection.

If you are attempting to determine an accurate price point for the Liberty Head $20 Gold Coin, look no further than the condition and type of coin. Because multiple types of the coins were minted every year, the exact type you own will play into the asking price. Secondly, condition means everything to collectors, and this means that the best conditioned coins are the ones that will sell for the big bucks. Below is a chart aimed at giving you a better idea of what you can expect to pay for a 1866 Liberty Head $20 Gold Coin given its type and condition.