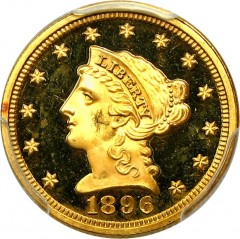 The 1896 Liberty Head $2.50 Gold Coins are among the most widely collected pre-1933 U.S. gold coins in the market today. Compared to other Liberty Head $2.50 Gold Coin issues from the 1880’s and 1890’s, the U.S. Mint produced this gold coin in huge numbers, striking a little over 19,000 coins. Even with the U.S. Mint producing such high volume, only a small amount of these coins exist today, as most have been melted. While it is extremely hard to say exactly how many remain today, what is known is that only a fraction still survive. Meaning, they are very scarce in terms of the marketplace and are relatively difficult to find. Of course, this is the situation with most pre-1933 U.S. coins, which were melted in major numbers throughout the 20th century, particularly after the country abandoned the gold standard.
As part of American minting history, the 1896 Liberty Head $2.50 Gold Coins draws attention from a lot of collectors. Because of this, these coins are becoming increasingly scarce with each passing year, so it is important to get your hands on them while you can.

As is the case with any coin sought after by collectors, the condition of the piece is everything. Even though these coins have plenty of age, there are still quite a few remaining in tip-top shape. Difficult to find, it is easy to see why collectors are willing to pay top-dollar for Liberty Head $2.50 Gold Coin that have been well-preserved.

Good: Good is the grade given to Liberty Head $2.50 Gold Coin that have seen an extended period of time having been circulated. The condition of these coins can best be described as poor, and the damage you will see on both faces will be extensive. Though these coins are in fairly poor shape, they are still great additions to any collection as they are more than 100 years old and quite rare.

When it comes to the price of the Liberty Head $2.50 Gold Coin, this is as easy as assessing its condition. Because coins this old are not expected to be in great condition, even the smallest differences in condition can mean for large differences in price. Below is a chart aimed at giving you a better idea of what you might have to pay for an Liberty Head $2.50 Gold Coin given its condition.