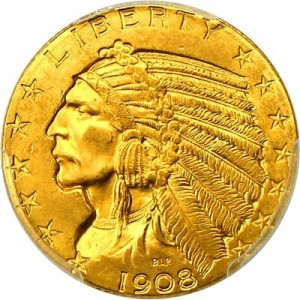 The Indian $5 gold coin was first minted in the early 1900s, and truthfully did not stay in production for all that long. Having their production ceased in 1929, the $5 Indian gold coin was in production for barely 20 years, meaning that there really aren’t all that many on the market. With most of these coins being 100+ years old, the condition they are in is subject to a lot of criticism. Even for coins in poor condition, they are still quite popular amongst collectors.

During its time being produced, the Indian $5 gold coin was one with an extremely high face value. Back then, $5 had a significantly stronger purchasing power which means that even when they were being circulated they were not able to be acquired by everyone. That much remains true today as the quantities of these coins on the market are diminishing with each passing year.

What You Will Pay for a $5 Indian Gold Coin

Because so few $5 Indians were minted, and because of the high value of gold, these coins are not typically acquired by collectors on a budget. Instead, it is mostly experienced collectors or those with a larger amount of money to spend that purchase these pieces. A general rule of thumb is that you will be hard-pressed to acquire a $5 Indian for less than $300. This means that even the most beat up coins are going to almost always carry a three figure price tag.

Some years’ coins are now more valuable than others, and it is not at all unusual for these pieces to sell for $1,000 and more. As the condition of the coin improves, the asking price is naturally going to increase. Most often, the increase that you see will become even more exaggerated as the condition improves. What I mean by this is that the jump from a Very Fine $5 Indian to an Extremely Fine version of the same coin can be a few dollars, while on other occasions it can be as much as $300 and up.

The Most Sought After $5 Indian Gold Coins

The most sought after Indians are all of them, because so few were produced. Thanks to their limited mintage, the reality of the matter is that these coins are going to be difficult to find in any condition. With that said, however, it is an undeniable truth that the most sought after of these coins are those that are in pristine condition. Every collectors wants to add attractive, aesthetically pleasing coins to their collection, and those that desire these coins are willing to pay the price to get them. Unfortunately, due to most of them having been circulated, finding a well-preserved $5 Indian is something that is much easier said than done.

The 1909O Indian is an example of a coin that is extremely valuable (and expensive) regardless of the condition it is in. This coin is so rare that even some of the worst preserved pieces sell for prices that exceed $3,000. The 1929 Indian is in the same boat as the 1909O, because it too is difficult to acquire regardless of condition.

Determining the future value of a specific coin is quite difficult to do. This is so because so many factors influence the asking price of a coin, what it sells for today may be completely different than what it sold for last year. Generally speaking, because so few of these coins are on the market today, the future value of a specific piece is likely to increase as time goes on. This is so because these coins are no longer being produced, which means that there are only ever going to be fewer and fewer up for sale. Knowing this, it is wisest to get your hands on these coins sooner rather than later. This is especially true of the $5 Indian because, unlike other coins of its day, it was minted in smaller quantities and for a shorter overall period of time.