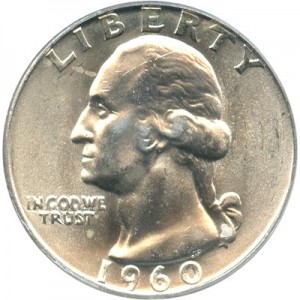 The Washington Quarter is an iconic piece of American coinage and has been produced since the years leading up to the outbreak of World War II. This coin pictures the profile image of George Washington—one of our nation’s most respected leaders. These coins had their composition altered after the 1960s, but those coins that were produced in the years leading up to the 1960s were still filled with silver.

When it comes to coins that are more than a half decade old, collectors will first and foremost assess the condition the coin is in. Because these pieces have had ample time to become damaged and worn, you will find that most coins are not in the best condition. Still, almost every collector desires to have the finest coins in their collection.

Under normal circumstances, a coin will be sent away to a professional company for grading. Unfortunately, not everyone can afford to have their coins sent away for grading, and because of this we have provided below an outline of the basic coin grades and their characteristics.

Uncirculated: A coin that is determined to be Uncirculated is one that spent almost no time at all being exchanged. These coins will have preserved their texture and even some of the mint’s original luster. All in all, these coins are in pristine condition and are the perfect addition to any collection new or old.

Extremely Fine: A coin that is determined to be of Extremely Fine grade is one that has spent some time in circulation, but not enough to have incurred any extensive bit of damage. You will notice some light scratching on the surfaces of the coin, but other than that the piece will appear nearly as pristine as an Uncirculated version.

Fine: If a coin is determined to be of Fine grade this means that the coin in question was circulated extensively. Unlike most extensively circulated coins, Fine Washington Quarters are going to have avoided much of the damage you will typically find on coins that have been so heavily circulated.

Good: A coin that is determined to be of Good grade is a Washington Quarter that has most definitely seen its better days. These pieces will have extensive damage, ranging from the chipping of the coin to the actual bending of it. Though in poor shape, these coins are still often added to collections—especially newly started collections.

For coins that are more than 50 years old, like the 1960 Washington Quarter, collectors have a lot to consider before making a purchase. For one, the condition of the coin needs to be assessed simple because the condition has a direct influence on price. Naturally, those coins that have been well-preserved will sell for higher prices than those that are in poor condition. Secondly, because multiple types of Quarters were minted every year, the exact type you own will also play into the asking price. Listed below is a chart aimed at giving you a better idea of what you might be asked to pay for a Washington Quarter given its condition and type.