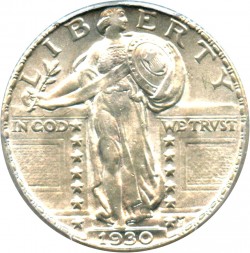 Of all coins produced by the US Mint in its long and storied history, few are more iconic and evocative than the Standing Liberty Quarter. Especially the early editions, these coins are sought after by collectors constantly. Making the process of collecting the Standing Liberty Quarter a bit difficult, however, is the fact that there exist two or three different varieties of the coin, all with their own values and scarcity.

When it comes to collecting these coins, regardless of its type, a collector will always look at the condition the coin is in. Seeing as only the most beautiful pieces are added to most people’s collections, it follows that collectors are willing to pay a hefty price to get their hands on a Standing Liberty Quarter in excellent shape.

When it comes to coins that are as old as the 1930 Standing Liberty Quarter, the condition the coin is in means everything to collectors. Naturally, a coin that has been preserved through the years will appeal more to a collector because of its inherent beauty. Being that these coins are so old, it is not the most common thing to find them in excellent condition.

Normally, coins are sent away for grading and that is something that is done by a professional coin-grading company. We know that not everyone has the time and money to send coins away for grading, so we have provided below a listing of the different grades and their associated characteristics.

Uncirculated: An Uncirculated coin is one that never spent any time exchanging hands and never had the opportunity to become damaged. These coins are in absolutely perfect condition and appear as though they were just recently minted. For collectors, these are the coins that are sought after more readily than any other.

Extremely Fine: A coin that is graded as being Extremely Fine is one that spent a very short period of time in circulation. These coins will have some very light signs of wear and tear, but apart from that will appear mostly pristine. Collectors also jump at the opportunity to get their hands on coins like these.

Fine: Fine is a grade given to coins that were circulated for an extended period of time, but were taken out of circulation before any major damage could occur to the surfaces of the coin. While there will most likely be some light, but consistent, scratching, the overall appeal of the coin will be in line with coins produced so long ago.

Good: Good is the lowest grade a coin can receive, and is indicative of a coin that has been quite heavily circulated over its lifetime. These coins will show all sorts of damage, ranging from scratching to chipping and just about anything else in between. A perfect part of a complete collection, these coins are not the first choice for most collectors.

If you would like to know how much a Washington Quarter from 1930 might cost you, there are a few things you must first consider. For one, because multiple types of the coin were minted every year, the exact type of coin you possess will affect the price you pay. Secondly, the condition of the coin means everything to collectors which means that the better-preserved the coin is the higher the asking price will be.

Below is a chart aimed at giving you a better idea of what you might expect to pay for a 1930 Standing Liberty Quarter given its type and condition.