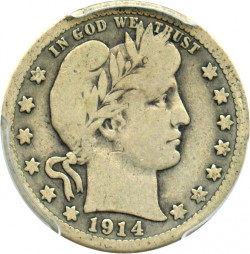 Throughout history the US Mint has produced countless beautiful coins, some of which are now prized additions to collections around the world. One of the most beautiful coins ever produced by the US Mint came in the late 19th and early part of the 20th century in the form of the Barber Quarter.

More quarters were made in 1914 than in any of the years prior to that point. While that makes the availability of 1914 quarters a little greater than for slightly older Barber quarters, 1914 quarters are still deemed as being relatively tougher than most other dates in the series. The 1914-S Barber quarter is a semi-key date that is considerably more expensive than the majority of other Barber quarters from the teens, thanks to a lower mintage.

When it comes to the 1914 Barber Quarter or any other in the collection, collectors will almost always tell you that the most important feature of the coin is the condition it is in. Being that no one desires to add poorly preserved pieces to their collection, it is only right that collectors pour over the surfaces of the coin looking to spot any and all imperfections.

Normally, sending a coin away for grading is a quick and easy way to figure out the exact condition of the coin, but not everyone has this luxury. Because of that, we have provided below a quick outline of the characteristics of graded Barber Quarters.

Uncirculated: An Uncirculated Barber Quarter is one that spent absolutely no time change hands on the open market. Instead, these coins have been fully preserved and appear as though they were minted a few weeks ago—not many decades earlier. As you could have probably guessed, these are the most sought after types of Barber Quarters and also the ones that fetch the highest price tags.

Fine: If a Barber Quarter is graded as being Fine, this means that it spent a good amount of time in circulation, but did not incur an overload of damage during that time. These coins will show consistent scratching on the faces, but apart from that will be in mostly nice condition. Another common type of wear found on these coins is the smoothing of raised images and inscriptions.

Good: A Good Barber Quarter is one that was circulated more than most others. During its time exchanging hands, these coins have incurred a lot of heavy damage including chipping, scratching, and bending. Though in poor condition, these coins are still sought after by those collectors looking to put together a complete set of Barber Quarters.

When it comes to giving the 1914 an accurate price, there are few factors that you have to take into consideration. For one, because multiple types of Barber Quarter were minted every year, the scarcity associated with the exact type of Quarter will be the first thing affecting price. Secondly, it all comes down to condition. Those Quarters that have been well-preserved will almost always carry a larger price tag than those that have been damaged. Below is a chart that will give you a better idea of what you can expect to pay for a Barber Quarter from 1914 given its condition and type.