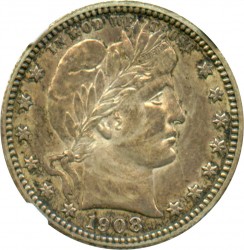 The US Mint was established more than 200 years ago, and over time has built quite the worldwide reputation. Emerging from humble beginnings, the US Mint has become an expansive organization that produces not only coins for the United States, but for many other countries around the world.

The 1908 Barber Quarters are generally considered common, and most were minted in substantial numbers, except for the San Francisco issue. The 1908-S Barber quarter is the tough date of the group of quarters from that year and was minted in a number of less than 1 million. Philadelphia, Detroit and New Orleans each minted well over 4 million quarters in 1908.

Produced during the late 1800’s and early 1900’s, the Barber Quarter played a pivotal role in the day-to-day financial lives of US citizens. Circulated for many decades, the quarter is now seen as a piece of American history, and thus a collector’s item.

Coins from 1908, such as the Barber Quarter are sought after by collectors, but the condition that the coin is in matters before anything else. No matter who you are, if you are a coin collector there is no doubting that you would prefer to only add those extremely well-preserved pieces to your collection. Naturally, collection full of well-preserved coins trumps that which is full of inconsistently worn pieces.

Normally, in order to have the condition of a coin such as the 1908 Barber Quarter judged, you would send the coin away to a professional company for grading. Because not everyone has the time and money to send their coins away, you will find that we have provided below an outline describing the characteristics of specific coin grades as to give you a better idea of what certain graded coins might look like.

Uncirculated: By definition, an Uncirculated coin is one that spent no time exchanging hands on the open market and was instead kept in safekeeping throughout its life. Because of this, the coins of this grade will be in near-perfect condition with almost no imperfections whatsoever. Appearing as if they were minted a few weeks ago, these are the most highly sought after types of Barber Quarters.

Extremely Fine: A coin given this grade is one that spent very little time in circulation. Thanks to the coin having been pulled out of circulation before long, there will be almost no signs of wear and tear present on the faces. Under close inspection, however, you will be able to notice some extremely light wear. Despite this, these coins are extremely valuable in the eyes of collectors.

Fine: A coin that is graded to be Fine is one that saw a lot of time in circulation, but did not incur a lot of damage as a result. These coins will show consistent scratching and some other signs of wear and tear, but the overall integrity of the imagery and inscriptions will have been maintained.

Good: Coins of this grade are, in so many words, the worst of the worst. These coins are the most heavily circulated and are complete with a good amount of damage. These coins are in poor condition, but they are still a great addition to any collection.

With regard to the 1908 Barber Quarter, determining a price is as easy as taking into consideration two different aspects of the coin. First, because multiple types of Barber Quarters were minted every year, the rarity associated with the specific coin type will be the first thing to consider when determining price. Secondly, you will have to assess the condition of the coin because those well-preserved coins are the ones that will sell for the largest amounts. Below is a table aimed at giving you a better idea of what you can expect to pay for a graded 1908 Barber Quarter.