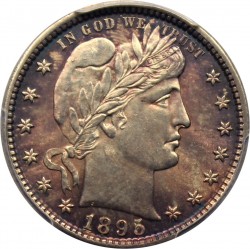 The Barber Quarter was first minted in the late 19th century and as with any 19th-century coinage, the higher-grade pieces are pricey and more challenging to find. For the most part however, collectors that are courageous enough to attempt completing a date-and-mintmark set of Barber quarters will usually buy lower-grade pieces to help make the expensive task just a tad bit more affordable.

The 1895 Barber Quarter is generally not considered scarce in the circulated grade of Good. That means it’s not difficult for the average coin collector to buy any well-worn quarter of that date for their collection. The New Orleans (O) and San Francisco (S) mint Barber Quarters from 1895 are the hard to come by. In fact, their mintages combined barely exceed the original output of their Philadelphia counterpart.

Because there were three different types of Barber Quarters were minted in 1895, collectors must first consider coin type then condition. Unfortunately, because these coins are so old, very few have survived the years in excellent condition.

For collectors, only coins in excellent condition will sell for high prices. This is why when a collector is given the chance to get their hands on a coin like the 1895 Barber Quarter, they will most often pay close attention to the condition it is in. Naturally, because of how useful these coins were when they were produced, most have incurred a good bit of damage.

Normally, the process of judging the condition of a coin is known as grading and is done by a professional company. Understanding that not everyone has the time and money to send their coin away for grading, we have provided specifications below that will give you a better idea of what characteristics apply to coins of a specific grade.

Uncirculated: A 1895 Barber Quarter that has been graded as being Uncirculated is one that never exchanged hands on the open market. Instead, these coins were almost immediately preserved as soon as they were produced. You will find that even under close inspection these coins show absolutely no signs of wear or damage whatsoever.

Extremely Fine: A coin that is graded to be in this condition is one that spent only a very limited amount of time in circulation. Because of the limited nature of this coin’s time on the open exchange market, the damage incurred is extremely light in nature. Only under close inspection will you be able to see the light scratching on the coin’s faces.

Good: A coin that is graded as being Good was heavily circulated and incurred a lot of damage during the process. These coins will be complete with heavy scratching, chipping, and other blemishes. These are the most affordable, but they are not necessarily the most attractive additions to a collection.

For coins that are from the late 19th century, the most effective way of determining price is by assessing the coin’s condition. For Barber Quarters, because there were multiple types of the Quarter minted every year, the type also plays a role in determining price. By way of the chart below you can gain a good idea of what you will pay for a Barber Quarter that is graded.