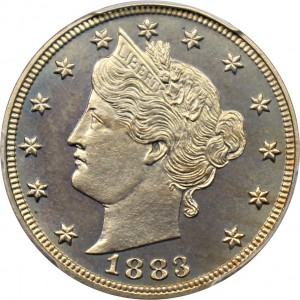 The 1883 V-Nickel was minted with a new design. The obverse detailed Liberty wearing a crown with agricultural elements intertwined with her hair. Thirteen stars surround the image with the date below. On the reverse, the denomination is indicated by a large Roman numeral “V” surrounded by an agricultural wreath and inscriptions.

The 1883 V-Nickel had a high mint for circulation, almost tripling the mintage of the ‘without CENTS’ variety. With that said, the “with (CENTS)” variety is the more in demand for today’s collectors. This is due to the public saving the initial variety while latter variety coins were not saved to this degree.

When a collector declares a desire to attain a coin as old as the 1883 V-Nickel, it goes without saying that person wants to find a coin that is in top shape. This is not a simple task, and is one of the main reasons collectors first and foremost, assess the overall condition of the coin in question.

The process of judging the condition of a coin is known as grading and is something that is completed by a professional coin grading company. Though you may not have the time and money to send your coin away for grading, you can use the specifications below to gain a better idea of the qualities coins of specific grades will have.

Uncirculated: An Uncirculated 1883 V-Nickel is one that was placed into a safe spot shortly after it was produced. Since these coins never spent time on the open market exchanging hands, they do not show the signs of wear you will find present on most V-Nickels. Rather, what you will find is a coin that has been so well-preserved that even the mint’s original luster remains intact, giving the coin a nice shine.

Fine: This is the grade given to 1883 V-Nickels that spent a decent amount of time exchanging hands. At this point the coin has lost most of the finer detail of the design. Even wear covering the entire coin gives a flatness to the appearance. Although major designs are still separated such as leaves on the Shield nickel and some of the hair detail on Liberty.

When it comes to giving the 1883 V-Nickel a price, this will depend on the condition the coin is in. Condition is everything for collectors, so you can expect that this is one of the biggest factors affecting the price you pay for a coin. Since collectors are eager to attain those coins that are in excellent condition, they will naturally pay more for those coins than the coins that are in sub-par condition. The chart below will give you a decent idea of what you can expect to pay for a 1883 V-Nickel given its condition.