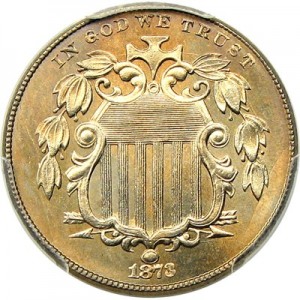 The Shield Nickel is easily one of the most popular coins ever produced by the storied US Mint. The coin was first minted during the first years following the Civil War, and are a crucial part of the history of the newly rejoined nation. As such, collectors from the US and abroad are constantly striving to get their hands on Shield Nickels from any and every year.

For collectors, getting their hands on one of these coins is one thing, but finding one in great condition is a different challenge entirely. Because these coins were so useful, many of them were used to the point that they either got destroyed or heavily damaged. Knowing this, it becomes significantly more difficult to get your hands on a well-preserved piece.

If you are a collector of coins, you are well aware of the fact that condition means absolutely everything. Upon receiving a coin as old as the 1873 Nickel, the first thing you will see collectors do is judge the condition of the coin. This process is known as grading the coin and is something every collector does.

Typically, grading is done by a professional organization, but by using your eyes and intelligence you can derive a rough, unofficial grade for the coin in question. The specifications below will help you gain a better idea of what a graded coin will look like.

Uncirculated: Uncirculated Shield Nickels are those that were minted and then almost immediately placed into safekeeping. Because they were never in circulation, these coins will show absolutely no signs of wear. In addition to all of this, the coin will have a shine similar to what it might have looked like the day it was produced.

Extremely Fine: An Extremely Fine Shield Nickel saw some time in circulation, but was taken out before too long. These coins will have some light scratching, but for the most part will appear to be pristine. On most occasions, the heaviest of the scratching on these coins can be found around the leaves surrounding the shield.

Fine: A coin graded to be Fine is one that saw a good amount of time in circulation, but not so much time that the coin was destroyed. Pieces such as these will show ample scratching and other signs of wear, but the imagery and inscriptions on the coin will remain wholly intact. Unlike the other two, superior grades, this coin will have had most of its luster faded away.

Good: A coin graded to be Good is one that was heavily circulated. With heavy scratching, chipping, and other signs of wear and tear, these coins appear to be pretty beaten up. Even the boundaries separating the images and inscriptions from the rest of the coin will have faded. This fading will make the faces of the coin feel smooth to the touch as opposed to being textured.

If you want to give an 1873 Shield Nickel a price, all you have to do is assess the coin’s grade. Collectors want the most well-preserved pieces in their collection, so it only makes sense that those that have been well-preserved are the ones that sell for the highest prices. With that said, even poor condition 1873 Shield Nickels sell for a good amount. The chart below will help give you a better idea as to what you might have to pay for a Shield Nickel of a given grade.