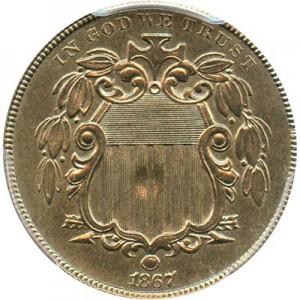 Shield Nickels were first produced in 1866, so it should come as no surprise that the second release of this coin series is just as popular as the first. The 1867 Shield Nickel is a crucial part of any Nickel collection and, seeing as it is one of the first editions produced, it is one of the first Nickels sought after by investors. Unfortunately, because of the coin’s age, very few have survived the years in good condition.

For collectors, it is paramount that they find these coins in well-preserved condition. While just finding one of these coins is special, no one wants to add a beat up, scratched piece to their collection—which is why the price for a well-preserved piece is much higher than one in decent to poor condition. Further, whether this coin has rays surrounding the numeral 5 on the reverse is something that can affect the price. Coins with rays are rarer and will almost always sell for a higher price than the same year Nickel without rays surrounding the 5 cent face value.

Judging the condition of a coin as old as the 1867 Shield Nickel is a way of giving the coin a grade. Typically, the process of grading is done by a professional company that utilizes the opinion of experts, but not everyone has the time and money to ship their coin off to be graded.

Instead, you can look at the appearance of a coin and give it your own grade. Though the grade will by no means be official, it can go a long way in determining an accurate value for the coin in question. The specifications below will help give you an idea of the characteristics of coins of specific grades.

Uncirculated: In Uncirculated condition, it is almost impossible to find any scratches or blemishes on the 1867 Nickel. Further, the pristine coin will have retained most of its original luster such that it appears shiny—extremely shiny for a coin produced in the 1800s.

Extremely Fine: An Extremely Fine 1867 Shield Nickel will show only a minimal quantity of wear. Most typically, the leaves along the upper edge of the shield will be slightly worn, but other than that the raised imagery is intact. Because of circulation, these coins will have lost much of their original luster.

Fine: Shield Nickels graded to be Fine are ones that saw a good amount of time exchanging hands. These coins will be complete with plenty of scratching and other signs of wear. The raised aspects of the shield may be smoothed a bit, but the major boundaries separating inscriptions and images from the rest of the coin’s face will easily be able to be deciphered.

Good: This is the grade given to Nickels in the worst condition. These coins have been circulated for many years and look like it too. Though the coin’s imagery can still be made out, the faces will have been almost completely smoothed thanks to years of trading hands.

In order to give an 1867 Shield Nickel a price, you must first look at the reverse side and determine whether it is a piece with or without rays. After establishing the existence (or lack thereof) of rays, you can then assess the coin’s condition or grade in order to derive an accurate valuation.