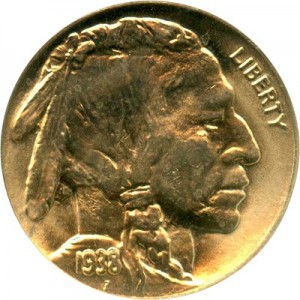 The 1938 Buffalo Nickel was the last of its kind produced. The Buffalo Nickel first made an appearance during the early parts of the 20th century, but was minted for many years beyond that. Due to the coin’s usefulness, American citizens used this coin on a daily basis. Nowadays, the Buffalo Nickel is popular amongst collectors who want to build a complete collection.

For collectors, however, the most important thing is the condition in which these coins are in. No one wants to add a tarnished or beat up coin to their collection, so it makes sense that investors are willing to pay top-dollar for coins that have been well-preserved through the years.

Despite the fact that the 1938 Buffalo Nickel is the newest edition around, it is still a pretty old coin. For collectors who would like to get their hands on one of these pieces, it is imperative that the coin in question be well-preserved. This is why you will see collectors almost immediately assessing the condition of a coin when they get their hands on it.

Normally, the process of judging a coin is known as grading and is something done by professional companies from all over the world. Knowing that not everyone has the time and money to spend to get their coin graded, we provided some helpful specifications below that can give you a better idea as to what a graded Buffalo Nickel might look like.

Uncirculated: An Uncirculated piece is one that never saw any time exchanging hands on the open market. These coins will have retained all of their original texture and will appear and look as though they were just minted. Even the original luster, which gives the coin its shine, will be mostly intact despite the coin’s age.

Extremely Fine: For Buffalo Nickels, an Extremely Fine version is one that saw only a very short period of time in circulation. These coins will have incurred some damage during their time exchanging hands, but this damage will be light in nature. The coin will not have a big shine, but the texture will be almost entirely intact and blemish-free.

Fine: Coins that are given this grade are those that saw a good bit of time on the open market. These coins will have incurred a decent bit of damage, but their imagery and inscriptions will still be easily made out with the naked eye. The heaviest damage you will find is most often located near the front legs of the buffalo or near the cheekbone of the Indian.

Good: In order to receive a Good grade, the coin in question will have had to incur a lot of damage during its time in circulation. These coins are going to be complete with heavy scratching, chipping, and other very noticeable signs of damage. Unfortunately, this is the grade given to most Buffalo Nickels on the market because they were utilized so much during their lifetime.

Because most editions of the Buffalo Nickel had a few different types produced, this is the first factor to consider when trying to price one of these coins. Apart from the type of coin you have, you must also look at what kind of condition it is in. Naturally, the better condition it is in, the more you will pay for it. The chart below can give you a good idea as to what you might pay for a graded Buffalo Nickel.