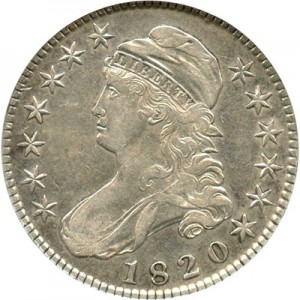 Thanks to these coin’s extreme age, they are difficult to find in good condition. By the same token, these coins are also quite expensive even though they may not be in the best shape. As time moves forward, Bust Half Dollars are going to grow increasingly difficult to acquire simply because they will be found in fewer and fewer quantities.

What You Will Pay for a Bust Half Dollar

The price you are going to be asked to pay for a Bust Half Dollar is wholly dependent on a few different factors. For one, the year in which the coin was minted means everything when it comes to determining a price point. As you might expect, those Busts that were produced during the 1700s and early 1800s will sell for higher prices than those that were produced during the 1820s and 1830s. Still, when it comes down to it, even the most recent Bust Half Dollars in poor condition will sell for a pretty penny.

Basically, the prices you will pay for a Bust Half Dollar can range from as cheap as $40 to as expensive as $30,000. The Flowing Hair Bust Half Dollar in excellent condition is an example of a coin that can sell for prices in upwards of $10,000.

The Most Sought After Bust Half Dollars

It is no coincidence that the most sought after Bust Half Dollars are also some of the most expensive. The first variety of the Bust Half Dollar, the Flowing Hair Half Dollar, is by far the most desired coin in the eyes of collectors. This particular variety of Half Dollar was only minted for two years, meaning that only a small number of these coins have ever existed.

With that said, however, any type of Bust Half Dollar is highly sought after by collectors. These coins are great pieces of American history in that they were some of the first to have ever been minted and circulated in the newly found United States. Regardless of variety, collectors will generally agree that they prefer to have only the most well-preserved coins added to their collection. Of course, when you are talking about a coin that is 200 or more years old, “well-preserved” is not the most accurate term. The standards set for condition are a lot lower for the Bust Half Dollar than they are for later versions of the coin.

Determining the future value of a coin is not something that is easy to do. With that said, however, while you may not be able to explicitly state exactly how much a Bust Half Dollar will cost 20 years from now, you can rest-assured knowing that the value of these coins will grow as time moves forward. Thanks to their being more than 150 years old, and in some cases more than 200 years old, there are only ever going to be fewer Bust Half Dollars on the market.

With these coins already being quite pricy regardless of condition, it would behoove you to make a purchase sooner rather than later. The longer you wait, the more expensive a purchase of a Bust Half Dollar will be.