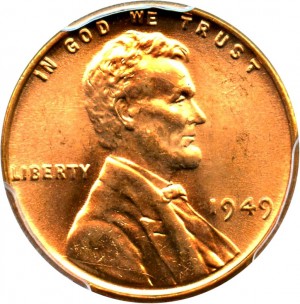 The Lincoln penny is an incredibly iconic coin, and is also one that has been produced for almost as long as US coins have existed. The 1949 Lincoln is especially collectible due to its age, and the fact that it is not being produced anymore. As the scarcity of this coin grows, so too does its popularity.

On the obverse side of the Lincoln penny you will notice that the central aspect of the coin is dominated by the image of Abraham Lincoln. Immediately to the left of Lincoln’s image is an inscription which reads “Liberty.” Opposite this inscription is another which marks the 1949 year of minting. Finally, the phrase “In God We Trust” is located along the top outer edge.

The reverse side of the coin features in the center 2 inscriptions. One of the inscriptions reads “United States of America” while another marks the “One Cent” face value. Along the left and right outer edges you will find two single stalks of wheat, which is why the penny is sometimes referred to as the “Wheat Penny.” Finally, the Latin phrase “E Pluribus Unum” is arching overtop.

Uncirculated: A coin that is determined to be Uncirculated is one that never spent any time on the open market exchanging hands. The fact that these coins have been kept in safekeeping throughout the majority of their existence means that they are free from flaws. Naturally, these are the most sought after 1949 Lincolns.

Extremely Fine: If a coin receives the Extremely Fine grade, this means that while it might not have ever been circulated, there is likely a flaw or two. In most cases the flaws you will find are nothing more than a small scratch or chip, and are sometimes not even able to be seen with the naked eye.

Fine: A coin that is graded as being Fine was probably circulated for a period of time, but did not incur a lot of damage. Though there will definitely be signs of wear and tear, such as scratching and smoothing, the coin will appear to be in decent shape.

Good: Good is the grade given to the most heavily circulated 1949 Lincoln pennies around. The damage on these pieces will be heavy, and range from deep scratching to significant smoothing of the raised aspects and imagery. Despite their somewhat poor condition, these Lincoln pennies are highly sought after.

In order to determine the value of a 1949 Lincoln penny, there are a few items that must be taken into consideration. First, because there were 3 different types of Lincoln pennies produced most years, the value will depend heavily on the type. Beyond that, the condition/grade is very important in determining the value. Below is a chart that will help you understand the different values of a 1949 Lincoln.