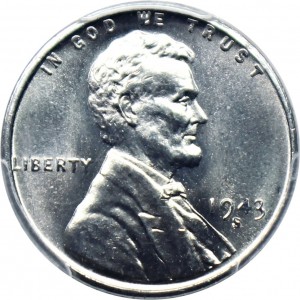 The Lincoln penny is an iconic piece of US coinage that has been around for a very long time. The 1943 interpretation of this coin is incredibly valuable to collectors due to its age, scarcity, and the uniqueness of the design. With the scarcity of these coins growing by the day, there has never been a better time to get your hands on the 1943 Lincoln penny. The 1943 Lincoln, in particular, is especially sought after due to its unique coloration. Due to a shortage of copper as a result of World War II, the US Mint was forced to craft these coins primarily out of steel. As such, they resemble a US Dime or Quarter more than the traditional penny. All of this works to make the coin incredibly unique in comparison to most every other version of the Lincoln penny.

As for the design of the coin, the obverse side is dominated by the central profile of Abraham Lincoln, for whom the coin was named. To the left of Lincoln’s image is a raised inscription which reads “Liberty.” To the right of the President’s image you will see a raised inscription marking the 1943 year of minting. Finally, the phrase “In God We Trust” will be inscribed over the top of the obverse.

As far as the reverse side of the coin is concerned, the central aspect is dominated by an inscription marking the “One Cent” face value. Beneath the face value inscription is one that reads “United States of America.” To the left and the right of the central inscriptions are single stalks of wheat, which help you understand why the coin is called the “Wheat Penny.” Finally, arching overtop of the reverse is the Latin phrase “E Pluribus Unum.”

For collectors, the biggest factor with coins as old as the 1943 Lincoln penny is the condition the coin is in. Because they are old, a majority of them have had at least some damage, and that is why collectors turn to graders. The following will introduce you to the different coin grades as well as what they mean for a 1943 Lincoln penny.

Uncirculated: A coin that is determined to be of Uncirculated quality is one that never spent any time at all on the open market. Having never exchanged hands, these coins will be in absolutely pristine condition. There will not be any flaws on its surfaces. The only defect you might notice is the fading of the coin’s color, which is something that occurs due to age.

Extremely Fine: A coin that is determined to be Extremely Fine is one that likely did not spend time in circulation, but accrued a bit of damage anyway. Typically, the imperfections on these coins are quite small and barely noticeable with the naked eye, but the fact that they exist is enough to prevent them from being of Uncirculated grade.

Fine: A coin determined to be of Fine grade is one that definitely spent time on the open market, but did not incur a large amount of damage during that time. You will notice scratching as well as some smoothing around the outer edges. This is due to the exchanging of hands over the years. All things considered, these coins still appear to be in decent shape.

Good: A coin that is of Good grade is a piece that will be heavily damaged. These coins likely spent their whole life in circulation and, as a result, incurred a lot of damage. Even though they are somewhat rough around the edges, they are still highly collectible.

When it comes to determining the value of a coin like the 1943 Lincoln, this is something that will depend on a few different factors. For one, there were up to 3 different types of coins produced each year. Understanding this, the value of a 1943 Lincoln will vary based on its type. Finally, the grade or the condition of the coin is important as well. Below you will find a chart that will help you understand a bit more clearly what one of these coins might be valued at.