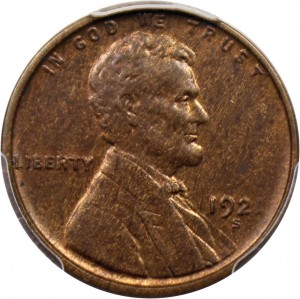 On the coin’s obverse, in the center, you will notice the profile of Abraham Lincoln, depicted with surprising detail. To the former President’s left, you will find a raised inscription which reads “Liberty.” On the opposite side is inscribed the 1921 year of minting. Finally, the words “In God We Trust” are inscribed across the top outer edge of the coin. Unlike some coins of this time, the outer edges are completely smooth, rather than reeded.

The reverse has two inscriptions dominating the central region, one that reads “One Cent” and one that reads “United States of America.” On both the right and left hand sides of the reverse are two single wheat stalks, hence why the coin is sometimes referred to as the “Wheat Penny.” The Latin phrase “E Pluribus Unum” is inscribed across the top.

Though it is indisputable that the 1921 Lincoln penny is the apple of any collector’s eye, it goes without saying that those in the best condition are the absolute most sought after. For coins this old, the condition is often determined by a coin expert through a process called grading. By way of a close inspection, the coin is ultimately assigned a grade that amounts to nothing more than a short description of its official condition. Below is an outline of the different coin grades as well as what they mean.

Uncirculated: If a coin is determined to be Uncirculated, this means that it, quite literally, never spent any time exchanging hands. As a result, the coin will have been perfectly preserved such that all of the original detail is still able to be seen and felt. Apart from some fading of the coin’s color, this 1921 Lincoln penny will be in flawless condition.

Extremely Fine: A coin that is determined to be of Extremely Fine grade is one that spent almost no time in circulation. Though it probably spent a majority of its life in safekeeping, there are still some minor imperfections present, such as a scratch. To the naked eye, however, these coins will appear to be nearly perfect.

Fine: Fine is a grade given to coins that have been circulated for a good bit of time, but have managed to remain in decent condition. Though there will be scratches and even some smoothing of the outer edges, most of the main imagery and lettering will still be plainly visible.

Good: Good is the worst grade a coin can receive. Typically, coins of this grade are incredibly worn and have a lot of damage. From deep scratching to the complete smoothing down of the coin’s raised features, it will be evident that these pennies exchanged hands often and for a very long period of time.

When it comes to determining the value of a 1921 Lincoln penny, this is something that depends primarily on the condition, or grade, but also on the type of coin it is. Because there were 3 different types of Lincoln pennies minted most years, there are plenty of different values for coins from the same year. Below is a chart that will help you understand the value of Lincoln penny given its grade and type. The 1921 Lincoln is interesting because there are just 2 types.