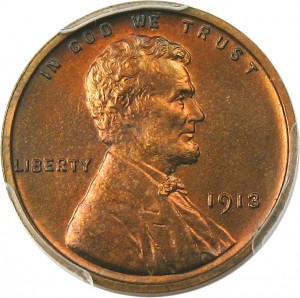 Though the Lincoln penny from 1913 might look a lot like the 1-cent coin used today, it is actually quite different. Collectors are in love with the old Lincoln pennies and will do everything they can to get their hands on them. With that being said, the age of these coins means that many of them have no survived the years in great shape. As such, the job of collectors—to get as well-preserved a coin as possible—is made much more difficult.

The Lincoln penny’s design is quite simple, but that does not at all take away from its desirability. On the obverse side of the coin you will find the profile image of former President Abraham Lincoln raised off the coin’s face and in the center. Arching over Lincoln’s image is a raised phrase which reads “In God We Trust.” To Lincoln’s left is the raised word “Liberty,” while the 1913 year of minting is to his right.

The reverse side of the coin is dominated by raised words in the center. Both “United States of America” and “One Cent” can be found here. On either side of these inscriptions will be a single stalk of wheat, which also explains why these coins are sometimes referred to as “Wheat Pennies.” Finally, the Latin phrase “E Pluribus Unum” is arching over the top of the reverse side.

For collectors, whether they would like to own a Lincoln penny or not is something based entirely on the condition it was in. Naturally, a collector is only going to want those coins that have withstood the test of time effectively. These coins will then be assigned a grade as determined by a professional. The following will introduce you to some of the different grades as well as what they mean.

Uncirculated: If a Lincoln Penny from 1913 is determined to be Uncirculated, this means that it spent a total of 0 hours exchanging hands. Instead, these coins were kept in a safe and secure spot throughout the whole of their existence. Even under close inspection they will show absolutely no signs of wear and tear. As such, these are the most desirable of all the different grades of Lincoln pennies.

Extremely Fine: If a coin receives an Extremely Fine grade, this means that it might have spent just a very short period of time exchanging hands. Though to the naked eye this coin will appear perfect, and all of the raised aspects will be intact, some minor imperfections will be noticed under close inspection.

Fine: If a coin receives a Fine grade, this means that it will show some signs of damage. On the 1913 Lincoln penny, this might come to fruition in the form of some wearing and smoothing of the edges, or scratches and chips incurred during its normal circulation. Either way, the coin will still appear to be in general great condition.

Good: Good is the worst grade a coin can receive and is indicative of a coin that has spent a good majority of its life being circulated. On these Lincoln pennies you will notice a large amount of wear and tear. In fact, some of the minor inscriptions (such as the “Liberty” or even the coin’s date of minting) might have been worn away altogether.

Because there were different varieties of this coin minted every year, the type of Lincoln penny you have as well as its condition will help you determine its price. Below you will find a chart that outlines what the different price estimates are for 1913 Lincoln pennies of varying types and grades.