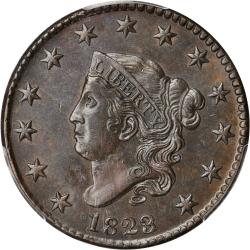 The 1823 Liberty Head Large Cent is a coin that collectors cannot ignore. Though this coin has not been minted for decades, collectors cannot help but try and get their hands on them. While this is so, the number of these coins available is decreasing all the time, so there has never been a better time to make a purchase.

On the obverse side of the coin, the central part of the face is dominated by an updated version of the image of Lady Liberty. As opposed to previous versions of the Large Cent, the Liberty Head depicts Lady Liberty facing leftward and with a band across her head. Inscribed within the band itself is the word “Liberty,” while the 1823 year of minting is indicated via an inscription towards the bottom of the obverse. Finally, there are 13 stars around the outer edge of the obverse, indicating the 13 original colonies of the United States.

On the reverse side of the coin, the center of the face is marked by the “One Cent” face value inscription. Surrounding the central inscription is an ornate wreath that features a whole bunch of detail. Finally, there is an inscription which reads “United States of America” inscribed around both of the aforementioned features. Finally, on both sides of the coin the outer edges are marked with raised rays, which give the coin a bit of added texture.

When it comes to the 1823 Liberty Head Large Cent, collectors are specific with regard to which ones they will want to get their hands on. Because these coins are so old and often counterfeited, collectors will not settle for pieces that have not been graded and certified as being authentic. Below is an outline of the different coin grades as well as what those grades mean.

Uncirculated: A coin determined to be of Uncirculated grade is one that never spent any time on the open market exchanging hands. These pieces are so well-preserved that they look today almost exactly like they did when they were first minted back in 1823.

Extremely Fine: A coin that is graded as being Extremely Fine is one that probably never spent any time in circulation, but is not free from damage. You will notice some small signs of damage such as a few scratches, but all in all the coin will be in extremely great condition.

Fine: Fine is the grade given to coins that have been circulated for an extended period of time, however they were taken out of circulation before too much damage could occur. On these coins, you will notice light, consistent scratching and smoothing, but most of the raised imagery and lettering will stil be discernable.

Good: Good is the worst grade a coin can receive. These pieces are usually home to plenty of scratching and chipping, sometimes so severe that the imagery and lettering on the coin’s surface will have been compromised. At the end of the day, these pieces are still sought after by collectors.

In terms of pricing, there are a few factors you have to consider in order to accurately price the 1823 Liberty Head Large Cent. For one, the condition of the coin means absolutely everything. As you might expect, more well-preserved coins will be priced higher than those that have been heavily worn. Secondly, the scarcity of the coin is called into question. The fewer there are, the more expensive they will be. The chart below is aimed at giving you a better idea of what you might be asked to pay for an 1823 Large Cent given its grade.