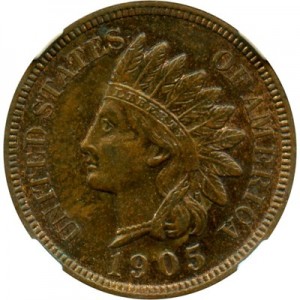 Of all the coins produced by the US Mint over the years, few series have gained more worldwide recognition than the Indian Head Penny. First minted about midway through the 19th century and continuously produced until the early 1900s, these coins have a long history.

With regard to the 1905 Penny, collectors want them, but only if they are in great condition. As the years move forward, finding these coins in great condition will only become more challenging as the most well-preserved coins are constantly being added to collections.

For coins like the 1905 Indian Head, collectors want to get their hands on a piece that has been preserved and is still in great shape. Knowing this, the challenge is always centered upon finding a 1905 in pristine condition.

The process of judging the condition of a coin is known as grading, and though grading is most often done via a professional service, you can judge the condition of a coin with your own eyes too. The specifications provided below will offer up some insight as to what coins of a certain grade will look like and what kind of characteristics they boast.

Uncirculated: Uncirculated Indian Heads are those that have been well-preserved through the years. These coins were not exchanged on the open market and were instead kept in a safe, secure locale. Thanks to not being circulated, these coins have survived the 100+ year journey to today with almost no signs of wear and with all of the original texture still intact.

Extremely Fine: Coins of this grade will resemble Uncirculated editions, but will show some minimal signs of wear. Still, at the end of the day you will be hard-pressed to find many defects on an Extremely Fine Indian Head. These coins are some of the most sought after by investors, seen in the slightly inflated price tag associated with them.

Fine: Fine is the grade given to Indian Heads who have seen a good amount of time changing hands. These coins will have a good amount of scratching on their faces and will have had some, if not most, of their texture worn down thanks to being exchanged. Still, with the imagery intact and able to be deciphered with the naked eye, collectors do not waste time when it comes to getting their hands on these coins.

Good: Good is the grade given to those coins that saw many decades being exchanged. With plenty of scratches and other blemishes, these coins are not so easy on the eye. In fact, you will find that a lot of the imagery has been compromised along with almost all of the coins original raised texture.