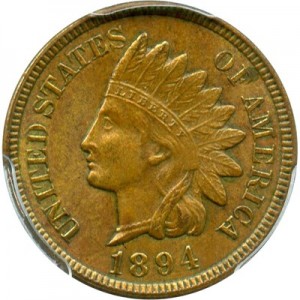 The 1894 Indian Head Penny is just one of many coins produced by the US Mint. While this is so, the Indian Head Penny is quite popular amongst investors because it is, for so many reasons, a major part of American history. Indian Heads from the 1890s are not quite as rare as some of their earlier counterparts, but seeing as the coins are more than 100 years old, they are still an incredible find—especially in great condition.

If you can find one of these pieces in great condition, you will have on your hands a valuable pieces of American coinage.

The 1894 Indian Head is more than 100 years old. On top of that, these coins, when circulated, were very commonly used amongst citizens of the United States. Knowing this, it should not come as much of a surprise that most of these coins are in poor condition.

When it comes to judging the condition of an 1894 Indian Head Penny, the official process of doing so is known as grading. Typically, grading is executed by a professional company, but by judging the condition with your own eyes, you can gain a good idea of what the coin’s grade might be. The specifications below can help you understand what coins of a certain grade look like.

Uncirculated: Uncirculated 1894 Indian Head Pennies are the rarest of the rare. They are in superb condition primarily due to the fact that they never exchanged hands. Instead, they were put into safekeeping immediately after minting. These coins will have all of the original imagery and inscriptions preserved, along with the coin’s texture. The only minor flaw you will find with Uncirculated Indian Heads is that some of the mint’s original luster will have worn away due to aging.

Extremely Fine: An Extremely Fine Indian Head Penny is one that was only circulated for a very limited amount of time. Some scratching will be present upon close inspection, but the coin itself will appear to be mostly pristine. Of course, because these coins have aged in addition to being lightly circulated, the mint’s luster will have likely been completely worn away.

Fine: 1894 Indian Head Pennies deserving of a Fine grade were in circulation for quite a bit of time. These coins will show some decent signs of wear including scratching and possibly even chipping. The raised imagery and inscriptions will have been worn down a bit, but viewing the imagery with the naked eye is not too difficult at all.

Good: Good is the grade given to the most heavily circulated Indian Head Pennies. These coins will be heavily scratched, chipped, and their faces will be worn such that they boast almost no texture whatsoever. Because these pennies were used so frequently when they were being circulated, you will more often than not find Indian Heads in this condition.

The 1894 Indian Head has its price determined directly by the condition it is in. For collectors, condition is everything; seen in the fact that people will pay top dollar for a pristine Indian Head. 1890s Indian Heads will likely only become increasingly scarce as time moves on. The chart found below will help you get a better idea of what you might be asked to pay for one of these pennies.