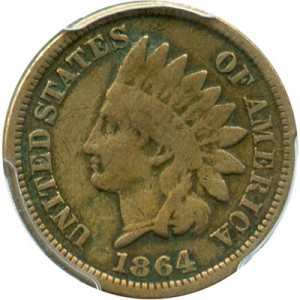 The 1864 Indian Head Penny is of particular interest to collectors because of an intriguing change that took place beginning this year. The heavier copper-nickel metal alloy that was used since 1859 was replaced by a bronze alloy. While most 1864 Indian Heads will be made with bronze, rarer, more valuable versions were minted with the old copper-nickel alloy. The copper-nickel (CN) pennies appear lighter than their bronze counterparts; this is the biggest differentiating factor between the two versions.

A separate, third type of 1864 Indian Head Penny exists, and it is a bronze type 1864 with an “L” inscribed behind the hair on the Indian’s neck. 1864 L’s are the rarest and, as such, carry the heftiest price tag. Also, if you would like to spot the “L” on your coin, a magnifying glass would be helpful considering the inscription is so miniscule.

When it comes to grading and ultimately determining the value of your 1864 Indian Head, the type is important, but so too is the coin’s condition. To put things into perspective, though the 1864 L type is the most difficult to find, one of them with a grade of Good will often sell for less than an Extremely Fine 1864 BR type (the most commonly found type).

So, while type is important, the coin’s grade will be the ultimate deciding factor in the determination of value. By using the specifications below, you can give your coin(s) an accurate grade.

Uncirculated: An uncirculated Indian Head Penny is one that was taken off the mint and almost immediately placed into safe-keeping. These coins have been perfectly preserved such that all inscriptions, engravings, and imagery can be seen with the naked eye. Even fine details can be discerned without too much trouble.

Extremely Fine: Unlike Uncirculated Indian Heads, Extremely Fine graded versions were circulated, though not for an extended period of time. Some wear is able to be seen, but for the most part the coin is in great condition and does not lack any fine details. Due to the changing of hands over an unknown period of time, however, it is easy to see that these coins were used on a day-to-day basis at some point.

Fine: While plenty of wear and scratching is able to be seen, so too is the coin’s design and inscriptions. The color of the coin may be a bit faded due to circulation, but the raised imagery is still there for the most part.

Good: These are the most heavily circulated versions of the coin. They look as though they were exchanging hands for an extended period of time and are typically complete with smoothing and scratching.

To determine how much a given 1864 Indian Head Penny can be bought or sold for, you must first establish what type it is. Generally, the 1864 L type is the most valuable. With that being said, however, the grade of the coin can alter the price drastically. The chart below can give you a rough idea of what type and graded 1864 Indian Heads sell for what prices.