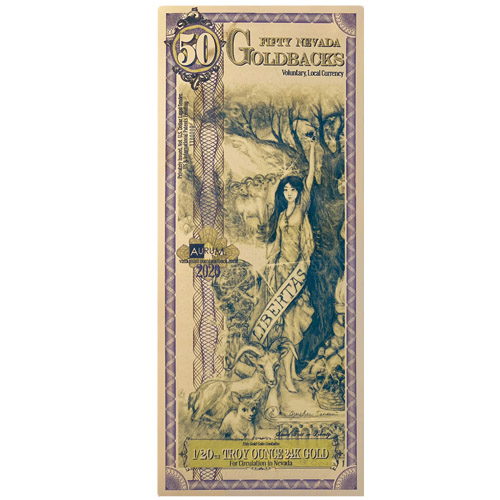 Libertas is the most significant female personification in American culture, but her origins date back thousands of years to the Roman empire and the mythology of the Ancient Romans. Libertas was the Latin term for “liberty or freedom” and was the Roman goddess that represented Liberty.

During the period of the Late Republic, Libertas was featured more prominently on coins of the empire. Libertas was typically featured in Roman art and mythology with a rod and soft pileus, a brimless, flat cap. That flat cap was often worn by freed slaves and those released from any form of servitude.

Obverse imagery on the 50 Nevada Goldback Gold Notes features a youthful depiction of Libertas. While she holds a rod in one hand, she holds up one of the common American symbols associated with Libertas: a torch. That torch provides a guiding light toward hope and freedom as Libertas stands near a goat and its young kid.

Libertas translates into English as Liberty and is associated with freedom and enlightenment. Liberty features on the Great Seal of France as it was created in 1848, and a French-designed Liberty statue now famously stands in the harbor in New York City. Though Columbia is the original female personification of the United States, Liberty has overtaken her figure in stature in the minds of Americans and has featured on countless denominations of US currency since the nation’s founding.

JM Bullion customer service is available to assist you with any questions about these gold notes on the phone at 800-276-6508. We are also available online through our live chat and email address features.