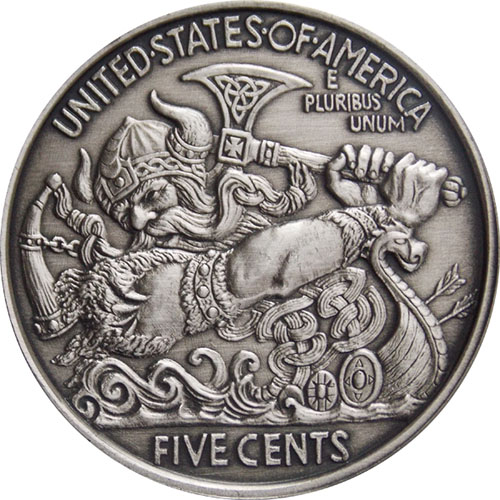 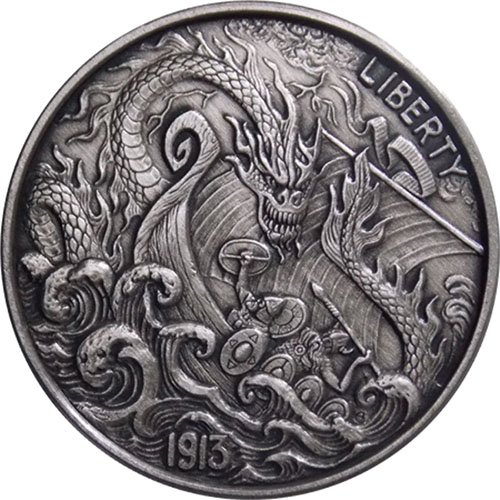 The Vikings were fearsome Norse warriors of the medieval world, impacting the lives of millions across Scandinavia, the British Isles, and mainland Europe from its western reaches to the east. Now, the Viking Berserker warrior is featured on the 9th release of the Hobo Nickel Series. Right now, 5 oz Antique Viking Berserker Rounds are available to purchase online from JM Bullion.

Each 5 oz Antique Viking Berserker Round in the Hobo Nickel Series is available to you inside of a protective plastic capsule. Included with your purchase is an individually numbered Certificate of Authenticity which reflects the edge-lettered serial number found on the round.

The antique finish of the Viking Berserker Round creates the visual impression of an ancient coin. Antique polishes are often added to coins or rounds for this exact purpose, while also brining the added benefit of highlighting the intricate details of the design elements.

Viking Berserker warriors were the champion warriors of Norse society. Tales of the Berserkers are found throughout Icelandic sagas, which chronical the trance-like fury with which these warriors fought on the field of battle. As if their physical appearance wasnt frightening enough, Viking Berserkers seemed to fear no man in battle.

On the reverse of the 5 oz Antique Viking Berserker Round youll find the image of a Berserker warrior. This Viking soldier is captured with a horned helmet, braided hair, and a double-headed battle axe in his hands. His mighty swing of the axe delivers enough power to decimate any opponent on the field of battle.

The obverse of the Viking Berserker Rounds includes the design of a Viking longship under attack by a dragon. The valiant warriors powering the famed Viking craft attempt to fight off the attack without fear of death. Engravings on both sides of the round reflect those of the original Buffalo Nickel, with Liberty and a year of issue on this side, as well as a face value, nation of issue, and E Pluribus Unum on the reverse.

The Hobo Nickel Series in 2017 offers new designs from the 2016 issue and each one comes from a different designer in this year. Aleksey Saburov created the Viking Berserker round, the 9th release from HotCos famed Hobo Nickel Series.

If you have any questions about this silver for sale, please contact JM Bullion. You can call us at 800-276-6508, chat with us live online, or email us directly.

John from WA - September 21, 2018
"The engraving is A and the subject matter is excellent. Since I\'m of Norwegion (sp) ancestry it\'s even more apelling. Thank you, it\'s my favorite. John"