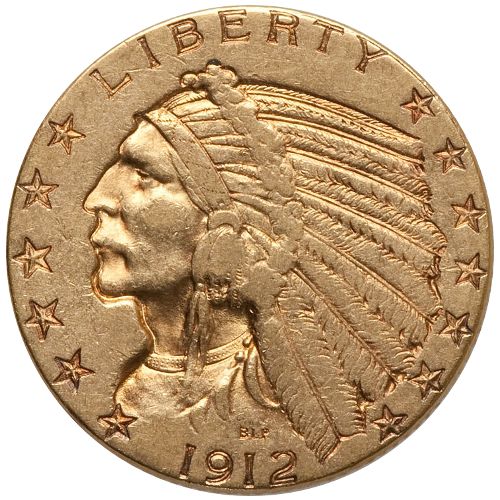 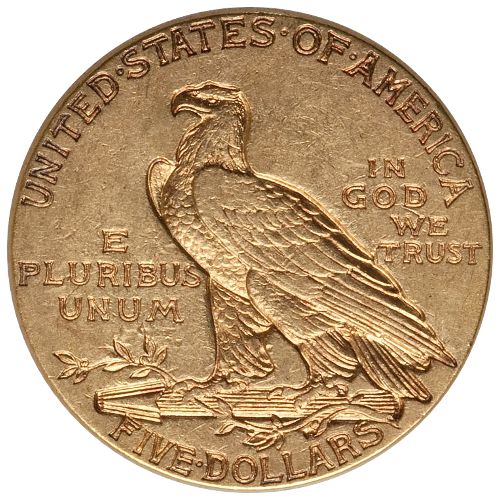 Because its mintage period precedes the 1933 cessation of gold currency, the Indian Half Eagle boasts a fineness of .900. It also possesses a size of .2418 oz, which makes it ideal for medium-sized investments. All Indian Half Eagles included in this collection are in XF (Extremely Fine) condition.

Unlike earlier versions of the Gold Half Eagle, which featured Lady Liberty on their front sides, the Indian Gold Half Eagle displays the portrait of a Native American chief. He is portrayed with the traditional feathered war bonnet of his people. Serving as a border around the chief’s profile is a ring of thirteen stars in honor of the original colonies. This patriotic border is interrupted by the word, “Liberty,” and the coin’s year of issue.

The Indian Half Eagle would feature a significant number of changes to its reverse side artwork as well. In place of the traditional Heraldic Eagle, artist Bela Lyon Platt chose to present a more realistic depiction of the iconic emblem. His rendition of the familiar symbol depicts a bald eagle, perched vigilantly upon an olive branch and a set of arrows. The intention, of which, was to provides viewers with a more literal portrayal of the classic image. In addition its artistic revisions, the Indian Half Eagle Coin would display some minor changes to its inscriptions; its denomination no longer included any abbreviations or numerical symbols.

For more details regarding the Pre-1933 $5 Indian Gold Half Eagle (XF), customers are encouraged to call 800-276-6508. Additional support is also available through live chat and online submission forms. To view other versions of this piece,please be sure to visit the $5 Indian Half Eagles section of this site.