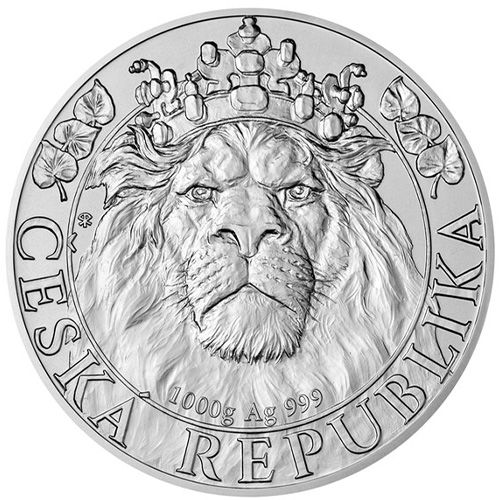 Lions are an ancient symbol of the Czech nation and culture, and have featured on multiple popular collectibles from the Czech Mint. The legendary and mythic reasons given for their importance are numerous. Some are fanciful, such as the story of the mythical Prince Bruncvik who traveled to Africa to help the King of Beasts battle his enemies. Others come from historical chronicles, such as the awarding of a royal crown from Emperor Frederick I Barbarossa to Prince Vladislaus II, complete with the lion as a new crest animal in the place of the existing eagle. Whatever the case, the lion continues to be a popular subject on pieces like the 2022 1 Kilo Niue Czech Lion Silver Coin.

The Czech Lion is also called the Bohemian Lion, a royal symbol that originally derived from the heraldry of the Holy Roman Empire. Its prominence in Czech iconography has been attributed to a number of different princes and their exploits, but the first unambiguously documented version of the Bohemian lion was as a symbol of the Přemyslid Dynasty on the equestrian seal of Vladislaus Henry in the year 1203. It became a symbol of the country as a whole during the reign of Ottokar II, also known as the “Iron and Gold” King.

Beautiful artwork of the leonine seal graces the 2022 Niue Czech Lion Silver Coin, available in brilliant uncirculated quality with its original luster. The team at JM Bullion fully insures every shipment against loss or damage, and it comes to you in a secure plastic capsule. Order early to get access to this extremely limited mintage.

The obverse side of the coin carries a heraldic eagle along with an official effigy of Queen Elizabeth II. These are accompanied by inscriptions of the Queen’s name, Niue as the country of issue, the year of issue, and the coin’s face value.

On the reverse side, artist Asamat Baltaev’s realistic rendition of the Czech Lion appears wearing the St. Wenceslas Crown. The inscription “Ceska Republika” appears at the rim, flanked by decorative leaves.

Contact the team at JM Bullion if you have questions when you buy silver online. You can phone us at 800-276-6508, talk with an agent live online, or send us an e-mail.