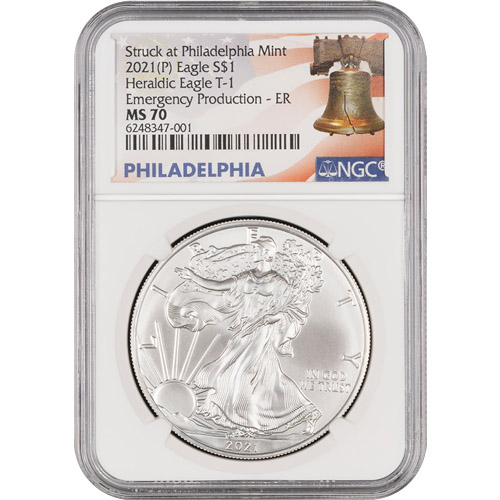 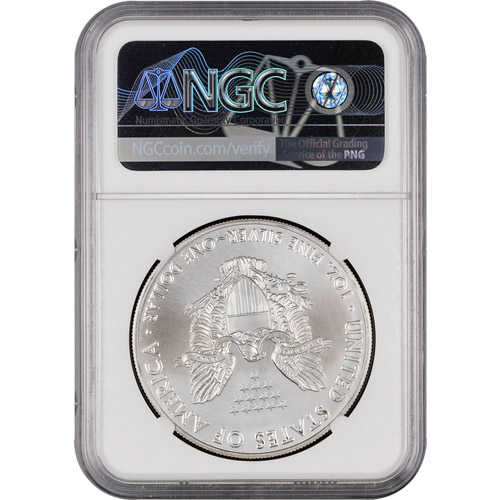 American Silver Eagle coins have been struck by three of the four US Mint branch facilities over the 35-year history of the series. The San Francisco Mint was the first, followed by the Philadelphia Mint. As of 2001, the West Point Mint has the honor of issuing all three versions of the coin. When demand exceeds the capacity of the mint, the other branch mints will again contribute to production. In 2020 and 2021, the Philadelphia Mint contributed emergency coining to the supply chain. Now, 2021 (P) 1 oz American Silver Eagle Coins are available to you for purchase online from JM Bullion in perfect condition.

Walking Liberty is found on the obverse side of 2021 (P) American Silver Eagles. This vision of Liberty in left-profile relief was created by Adolph A. Weinman in 1916. It features Liberty walking toward the sun as it crests a mountaintop in the distance.

In its final release, the heraldic eagle of the United States is found on the reverse of 2021 (P) 1 oz Silver Eagles. The heraldic eagle design comes with a bald eagle supporting the US national shield as it clutches the arrows of war and the olive branch of peace.

2021 (P) 1 oz American Silver Eagles are available in this listing in perfect condition. Mint State 70 coins showcase full, original mint luster and have no detracting flaws. The Early Release label means each specimen was received for grading within 30 days of its initial release.

JM Bullion customer service is available at 800-276-6508. You can also chat with us live online or simply send us an email with your inquiries.