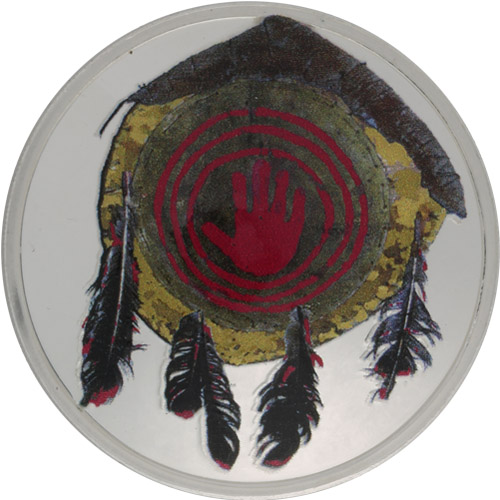 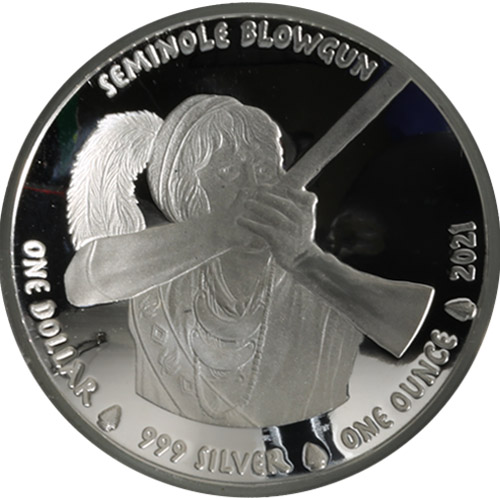 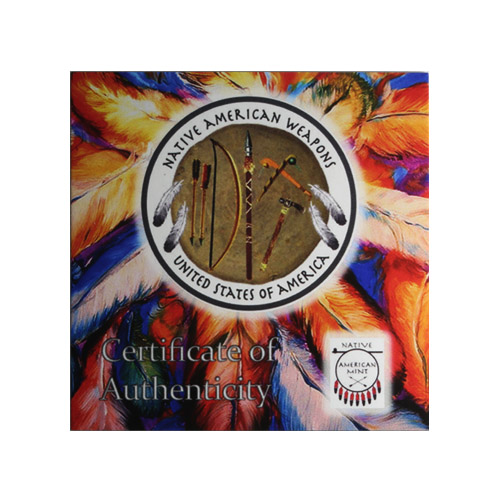 Seminole tribes originated in what is now known as the US state of Florida. The original indigenous tribes here were among the first to interact with Spanish explorers arriving in the 16th century, but those tribes were almost completely decimated by the diseases the Europeans brought with them to the New World.

Seminoles come from a lineage of Yuchi, Yamasee, Muscogees, Choctaw, and Chickasaw people. As these tribes formed the Seminole nation in Florida, their arrival was met with a land that had been almost abandoned as a result of the massive death toll imposed on the original indigenous tribes on the Florida peninsula.

Obverse design elements on 2021 1 oz Proof Seminole Blowgun Curved Silver Coins include a curved surface with a colorized design and no inscriptions for a clean visual finish. The war shield design is adorned with four feathers and has a red handprint with three concentric circles around it. The shield was made with extra layers of buffalo hide for enhanced strength. The design element is fully colorized with bright red in the handprint and black-and-red feathers.

As the various tribes of Yuchi, Yamasee, Muscogees, Choctaw, and Chickasaw spread throughout the panhandle and peninsular regions of Florida, the members began to intermarry and intermingle, creating a culture that would become known as the Seminole people. Though subsequent wars with the Spanish and the Americans dwindled their numbers, today the modern population is estimated to be around 18,600 enrolled members.

Reverse design features of the 2021 Proof Seminole Blowgun Curved Silver Coins depict a Seminole warrior using a blowgun. The blowgun was a primitive, projectile weapon. The efficacy and range of the blowgun were entirely dependent upon the lung capacity and exhalation of the user.

2021 1 oz Proof Seminole Blowgun Curved Silver Coins arrive with proof visuals consisting of frosted designs and mirrored fields. The coins are packaged inside of protective capsules with a presentation box and a Certificate of Authenticity included.

JM Bullion customer service is available to assist you with questions at 800-276-6508. Additionally, you can reach out to us online via our live chat and email address features.