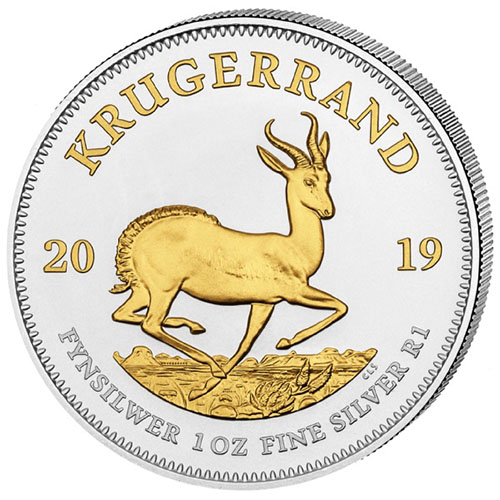 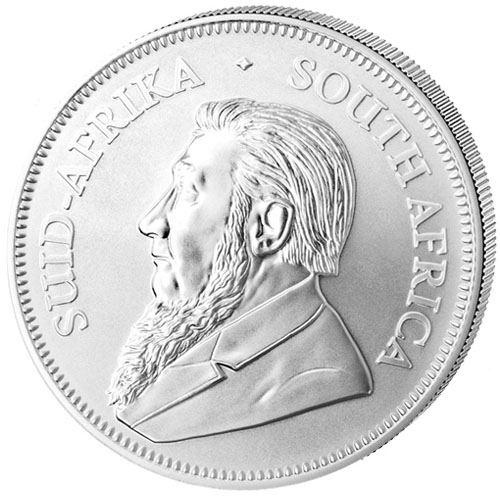 All of these 2019 1 oz South African Silver Krugerrand Coins are available in Brilliant Uncirculated condition with protective packaging to house the coins. As gilded specimens, these coins have a thin layer of 24-karat gold applied to the reverse design element of the Springbok antelope. This layer of gold is not enough to alter the value of the coin from a precious metals standpoint, but it does create visual brilliance on the reverse design element with its inclusion.

The reverse of 2019 South African Silver Krugerrand Coins includes the Springbok antelope image in right-profile relief. The antelope is depicted as it leaps across the open plains of South Africa. The ground in the design and the antelope itself have the gilded layer applied to create a visual contrast between the coins silver surface area and the gold visual of the design elements.

On the obverse of 2019 1 oz South African Silver Krugerrand Gilded Coins is the image of Paul Kruger. Depicted in left-profile relief, the former President of the South African Republic has not been altered with the addition of a gilded layer of gold. His portrait retains its crisp silver brilliance.

Please feel free to reach out to JM Bullion if you have questions about silver for sale. You can call us at 800-276-6508, chat with us live online, or simply send us an email with your inquiries.

Rick from OH - October 09, 2019
"Ordered two of these SAM gilded coins; they arrived in two days! Beautifully encapsulated coins! Buy as much silver as possible at the current prices; one of the great investments of our time. Thank you, JM Bullion!"