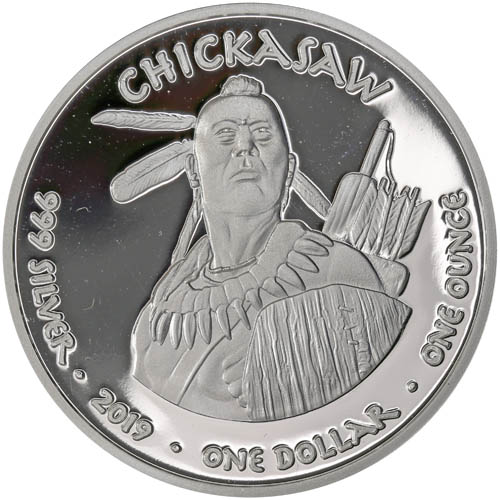 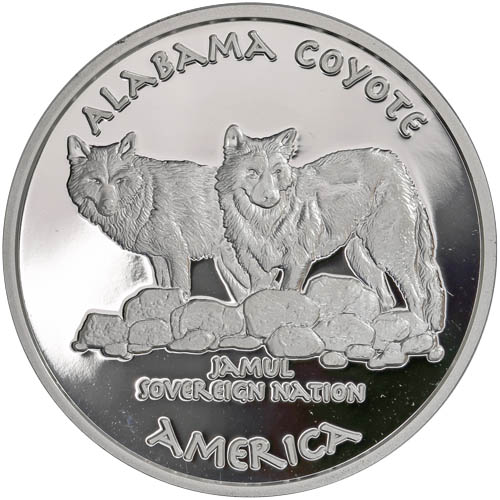 The Native American Mints Proof Silver Dollar Series continues in 2019 with a variety of new releases following the same spirit of design as the more than 20 previous issues. The Proof Silver Dollar Series from the mint offers up the image of a tribal figure on the obverse and a native species on the reverse matching the home range of that same tribe. Right now, 2019 1 oz Proof Alabama Chickasaw Coyote Silver Coins are available to purchase online from JM Bullion.

Each of the 2019 1 oz Proof Alabama Chickasaw Coyote Silver Coins available to you in this product listing comes with a protective plastic capsule to house the coin. The Native American Mint issues each coin in this series on behalf of a different tribal nation with a nominal face value of One Dollar. However, the coins hold no legal tender status in the United States as only the sovereign mint of the nation can strike coins with Congressional-backed face value.

The Chickasaw Nation came into direct contact with European-American settlers during the early 19th century as a result of its own migratory patterns. Historically, the Chickasaw came from the western reaches of what is now the United States and moved into the southeastern United States east of the Mississippi River.

On the obverse of 2019 1 oz Proof Alabama Chickasaw Coyote Silver Coins is the design of a Chickasaw tribal figure. The Chickasaw are currently the 13th largest federally recognized tribe in the United States. Their modern-day population totals roughly 38,000 people and includes John Herrington, a former US Naval Aviator and NASA astronaut.

The reverse side of Proof Alabama Chickasaw Coyote Silver Coins includes the image of a coyote. This canine species is native to North America and is a smaller relative of the gray wolf. It has a wide distribution throughout North America into Mexico and Central America.

If you have any questions about these proof silver coins, please contact JM Bullion. Our customer service team is available at 800-276-6508, online using our live chat, and via our email address.