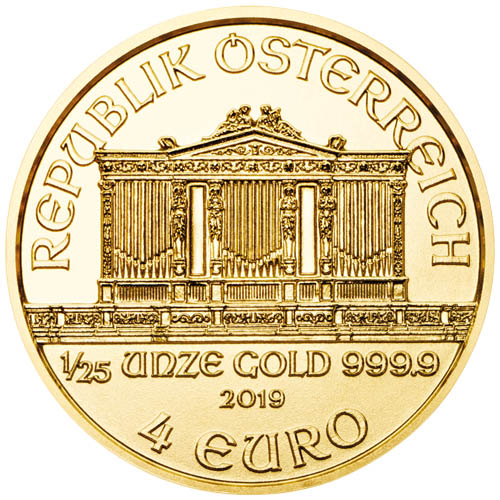 Each 2019 1/25 oz Austrian Gold Philharmonic Coin in this listing is available to you in Brilliant Uncirculated condition. The coins in the 1/25 oz weight for the Gold Philharmonic ship in either individual protective packaging or mint tubes of 25 coins.

The Austrian Gold Philharmonic Coin was the first issued in the overall Austrian Philharmonic Series. The coins debuted in 1989 with a 1 oz gold and 1/4 oz gold coin option. Over the past three decades, the Austrian Mint has introduced three additional fractional weights. The first two, 1/2 and 1/10 oz, were added relatively quickly in the 1990s.

These 1/25 oz Austrian Gold Philharmonic coins are the most recent addition having been added to the series in 2014 to mark the 25th anniversary. The diminutive weight was a commemorative choice given the date, but its size has proven popular with investors and remains in the series to this day.

On the obverse of 2019 1/25 oz Austrian Gold Philharmonic Coins is the image of the Great Organ. This central piece to all Vienna Philharmonic performances is a fixture of the Golden Concert Hall, or Musikverein, which is located in the Innere Stadt neighborhood of Vienna.

The reverse of Austrian Gold Philharmonic Coins features the design of musical instruments. Featured in this design set are a total of nine instruments that include a cello, four violins, a harp, a bassoon, a flute, and a horn. Engravings on both sides of the coin are in German, the official language of Austria.

If you have any questions, please feel free to reach out to JM Bullion. You can talk with our customer service team at 800-276-6508, online via our live chat service, and using our email address.