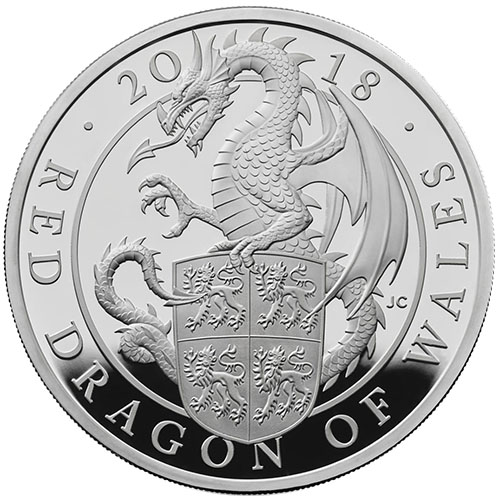 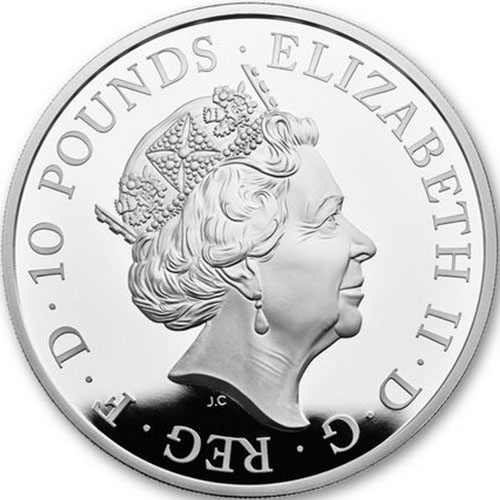 The Proof British Silver Queen’s Beast collection includes four options for collectors to choose from, none of which are available in the bullion version of the coin. These coins have the same design and purity of the bullion coins, but with different weights, low mintage figures, and a stunning finish, there’s nothing quite like them.

Older than Britain’s Lion of England heraldic beast, the history of the Red Dragon of Wales is rooted in the ancient myths of dragons. To the people of Britain, dragons were animals to be feared that had the power to breathe fire and destroy villages, armies, and whole kingdoms. Eventually, the dragon was adopted as a symbol of wisdom and power among monarchs of Great Britain.

On the reverse of the 2018 5 oz Proof British Silver Queen’s Beast Dragon coins is the image of the Red Dragon of Wales. Rooted in the 6th-century tales of a dragon of Cadwallader, the Red Dragon has been the official symbol of Wales since 1959.

The obverse of all Proof British Silver Queen’s Beast Dragon coins includes the portrait of Queen Elizabeth II. In this fifth-generation effigy from Jody Clark, the Royal Mint hits a milestone it doesn’t often achieve in the portraits of monarchs on coinage. Queen Elizabeth II has reigned since 1952 and is the longest-reigning monarch in the kingdom’s history.

2018 5 oz Proof British Silver Queen’s Beast Dragon Coins are specially packaged and housed by the Royal Mint. The coins are individually encapsulated and set within the black, commemorative display box of the Royal Mint. Included with your purchase is a Certificate of Authenticity.