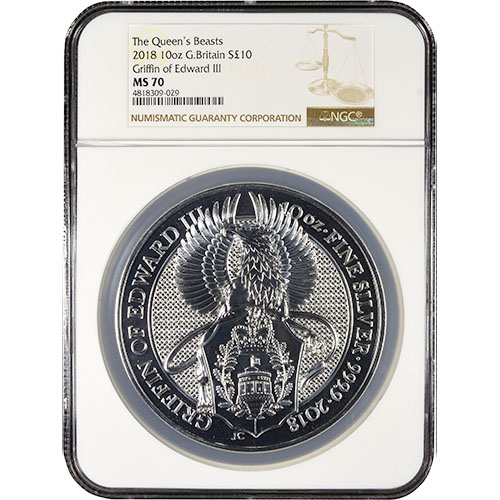 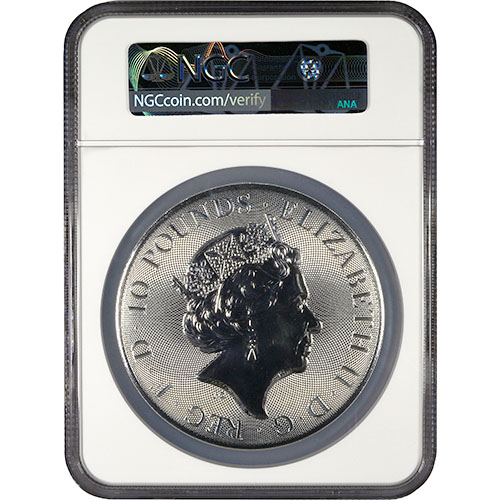 The Griffin of Edward III is one of the oldest heraldic creatures to feature in the Queens Beast Collection from the Royal Mint. This 10-coin series features each of the heraldic beasts present at the coronation ceremony for Elizabeth II in January 1953 at Westminster Abbey. Right now, 2018 10 oz British Silver Queens Beast Griffin Coins are available to purchase online from JM Bullion in perfect condition!

Each of the 2018 10 oz British Silver Queens Beast Griffin Coins in this product listing is available to you in perfect condition. The NGC issues the Mint State 70 certification to coins which exhibit full, original mint luster and lack any detracting flaws on the surface areas or design elements of the coin.

King Edward III ruled as King of England from 1327 until his death in 1377. Ruling for just over 50 years, he enjoyed the second-longest reign in medieval Britain. His time in power saw Englands military might grow as the kingdom became a power in Europe, but also saw the ravages of the Black Death sweep across Europe and England.

On the obverse of the 2018 10 oz British Silver Queens Beast Griffin Coin is the effigy of Queen Elizabeth II. Her Majesty is now the longest-reigning British monarch at more than 65 years and features on these coins in a fifth-generation design. This right-profile portrait was created in 2015 by Jody Clark when the Queen was 89 years old.

The reverse of the 2018 10 oz British Silver Queens Beast Griffin Coin features the heraldic beast of King Edward III. Edward was a falconer by hobby and chose the mythical Griffin as his symbol, pairing it with the tower from Windsor Castle in which he was born in 1312 as part of his royal arms.