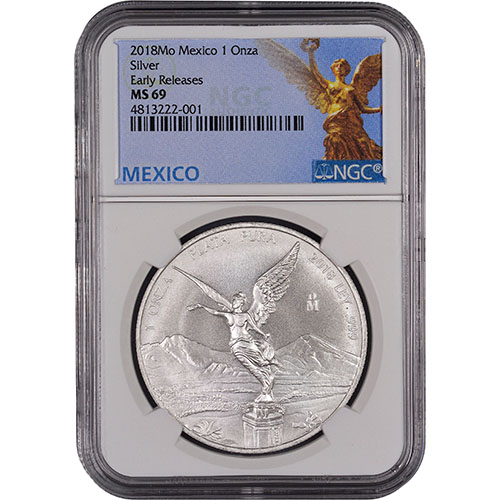 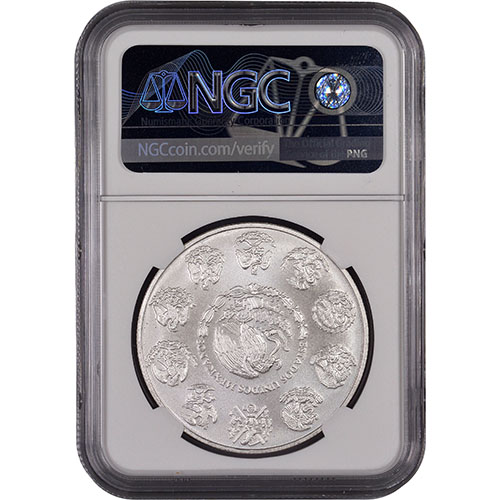 As the official silver bullion coin of Mexico, the Silver Libertad bears design elements that reflect the national pride of the Mexican people and bear witness to the symbols that carried people through their struggle for freedom from Spanish colonial rule in the early 19th century. Right now, 2018 1 oz Mexican Silver Libertad Coins are available to purchase online from JM Bullion.

Each of the individual 2018 Mexican Silver Libertad coins available for sale here today is in near-perfect condition. The Mint State 69 grade from the NGC indicates a coin exhibits full, original mint luster with a maximum of two minor detracting flaws. Located only outside the primary focal areas, those flaws are limited to minuscule hairlines or contact marks.

The Early Release label included in the slab of these coins denotes their arrival at the NGC for certification. To earn the ER label, coins must be received by the NGC within the first 30 days of their 2018 release by the Mexican Mint.

On the obverse of the 2018 1 oz Mexican Silver Libertad is the depiction of Winged Victory. The symbol of Mexican perseverance over Spanish colonial forces in the 1820s, Winged Victory stands tall over Mexico City today at the top of the Mexican Independence Victory Column erected in the city in 1921 to mark 100 years of freedom and independence.

The reverse of the 1 oz Silver Libertad Coin features the coat of arms for the nation of Mexico. In the center of the design is the modern coat of arms, which is surrounded on the outer design rim by 10 historic versions of the nations coat of arms.

Mexican Mint is the official sovereign mint of the nation and is controlled by Banco de Mexico, with oversight from the federal government. The mint was originally formed in 1535 by Spanish conquistadors and once served Spanish colonies throughout the Western Hemisphere with coinage.

If you have any questions, please contact JM Bullion. Our customer service team is available to you on the phone at 800-276-6508, chat with us live online, or email us directly.