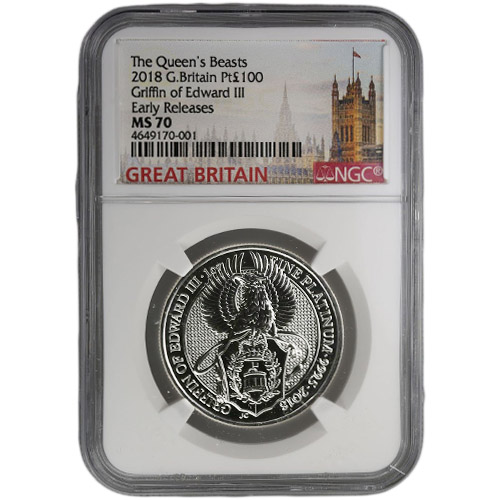 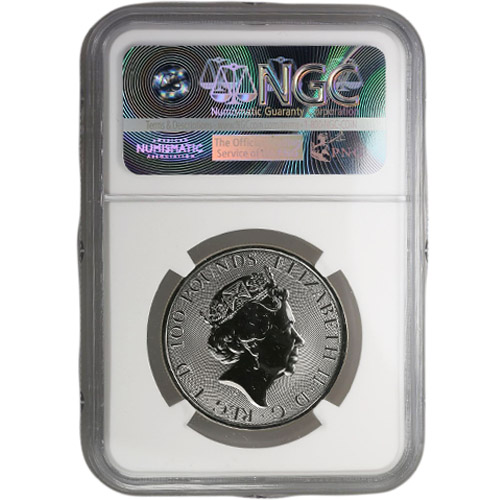 The Royal Mint introduced the Queens Beast selection of silver and gold bullion coins in 2016 with the Lion of England, the most important heraldic creature in the nations long history. Second in that design series was the Griffin of Edward III, and with the recent introduction of a new platinum option in the series, the Griffin is set to make its appearance anew! Today, 2018 1 oz British Platinum Queens Beast Griffin Coins are available to you online from JM Bullion.

Edward III was the King of England for 50 years during the medieval period in Europe. His reign as King of England was the second longest of any British monarch during the medieval centuries, and his time on the throne marked a period of great revival for Englands image in Europe. A gifted military tactician, Edward III led the Kingdom of England into the Hundred Years War with France, enjoying many victories under his guidance.

The Platinum Queens Beast coins are a new introduction as of 2017, with the Lion of England again serving as the first design release in the collection. The Griffin of Edward III might be second in line again, but it is the first platinum coin in the series to feature the new guilloche background field on the obverse.

All 2018 1 oz British Platinum Queens Beast Griffin Coins are available in perfect condition according to the NGC. Coins with a Mint State 70 certification showcase full, original mint luster with no detracting flaws of any kind. The Early Release designation is for coins which are received for grading within the first 30 days of their release from the Royal Mint.

On the reverse of the Platinum Queens Beast Griffin Coin youll find the seal of Edward III. The Griffin is shown standing over the Round Tower of Windsor Castle, the place that Edward III was born. There is a Royal Standard flying from the turret and two branches of oak with the royal crown upon them.

The obverse of all British Platinum Queens Beast Coins features the latest fifth-generation portrait of Queen Elizabeth II. Created in 2015 by Royal Mint Engraver Jody Clark, it captures Her Majesty in right-profile relief.

Please feel free to reach out to JM Bullion with your questions regarding these coins. You can call us at 800-276-6508, chat with us live online, or simply send us an email. We encourage you to check our price chart pages for the latest platinum price when buying!