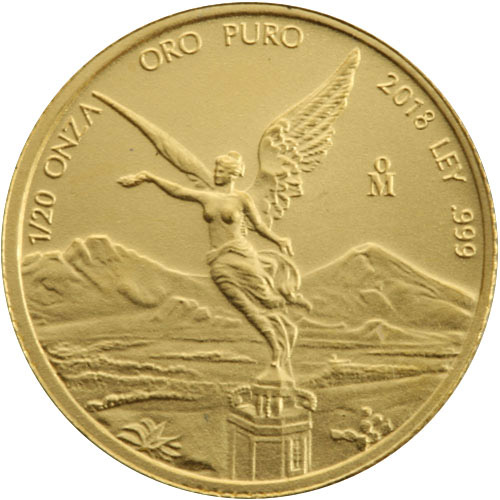 The Gold Libertads were introduced by the Mexican Mint in 1981, just two years after Canada introduced its Gold Maple Leaf as the second major gold bullion series available in the world. However, 1981 was a one-year issue and the mint would not strike the Mexican Gold Libertads again until 1991.

The reverse of the 1/20 oz Mexican Gold Libertads features the coat of arms for Mexico. This design includes a bald eagle battling a rattlesnake as it rests on the arm of a cactus. The seal is surrounded on the bottom by a wreath, with Estados Unidos Mexicanos engraved above to complete the encirclement.

Your purchase of a 2018 1/20 oz Mexican Gold Libertad provides you with a coin in BU condition. Coins in this condition bear no signs of wear and tear from handling, but may feature breaks in the luster, spotted surfaces, and contact marks.

We encourage all JM Bullion customers to contact us with questions at 800-276-6508. You can also connect with us online through our live chat and email features.