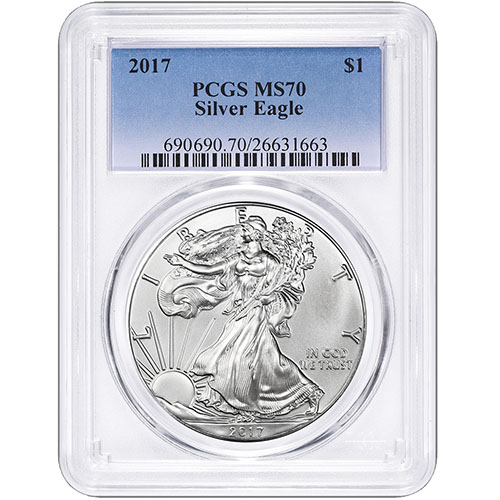 Each of the 2017 American Silver Eagle coins in this JM Bullion product listing is available in Mint State 70. When the PCGS issues a coin a grade of MS70, it identifies that coin as a perfect product. Each coin has its full, original mint luster, and features no detracting flaws of any kind, such as blemishes, contact marks, or spotted surfaces.

American Silver Eagle coins are the official silver bullion product of the US government. Though the coins originated as an effort to raise funds for the federal government in the 1980s, today it is one of the most popular precious metal products available in the world. The American Silver Eagle is coveted by investors and collectors alike.

The image featured on the obverse face of the coin comes from Adolph A. Weinman. He created the image of Lady Liberty striding toward the setting sun with the American flag draped around her shoulders in 1916 for use on the nations half-dollar silver coin. It remained on that coin for more than 30 years, and was not replaced until 1947.

Today, the image features on the obverse face of all 2017 American Silver Eagle coins. In it, Liberty walks toward the setting sun with the American flag draped around her shoulders. The reverse of the 2017 American Silver Eagle features US Mint Chief Engraver John Mercantis heraldic eagle. Echoing the images of the Great Seal of the United States, the image features 13 stars representing the original colonies, and a bald eagle behind the heraldic shield of America.

If you have any questions, please dont hesitate to ask. JM Bullion customer service is available to help you at 800-276-6508, online using our live web chat, and via our email address.