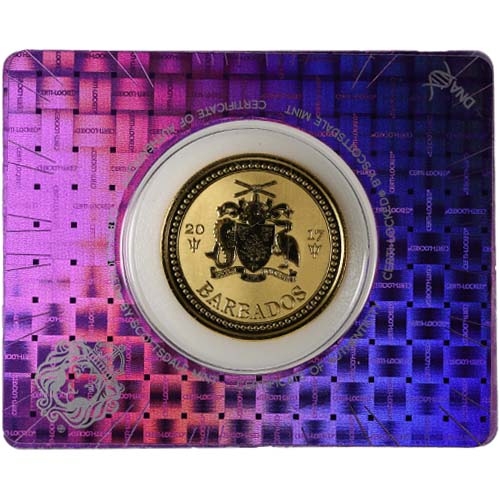 In 2017, the Scottsdale Mint unveiled its latest collaboration with a foreign reserve bank with the release of the Barbados Trident coin. Originally unveiled as a silver bullion coin, the program now expands to feature a beautiful gold coin for sale. Right now, 2017 1 oz Barbados Trident Gold Coins are available to purchase online from JM Bullion.

Each 2017 1 oz Barbados Trident Gold Coin is available in BU condition. Coins in BU condition exhibit no signs of wear and tear, but do potentially possess minor flaws from the coining process. These are limited in nature to breaks in the luster, spotted surfaces, or contact marks.

The Barbados Trident collection debuted in 2017 with the silver coin. This the latest in a string of new, foreign-reserve coins from the private mint in Arizona. Other examples include its long-running programs with African nations and the new Cayman Islands series of silver coins as well.

On the reverse of the 2017 1 oz Barbados Trident Gold Coin youll find the image of a powerful trident. The trident is viewed as a powerful weapon capable of controlling the seas and was wielded in the ancient world by the Roman god of the seas, Neptune. As an island nation surrounded by thousands of miles of water on all sides, the people of Barbados are accustomed to living at the mercy of the oceans.

The obverse of the Barbados Trident coins includes the national crest of Barbados. This seal emphasizes the natural beauty of the country, and includes the broken shaft of the trident above the center of the crest with two heads of a trident on either side along with the year of issue. The national motto of Pride and Industry appears on a banner below.

Scottsdale Mint is a private American mint in the state of Arizona. The mint specializes in the production of silver and gold bullion using environmentally responsible methods, such as sourcing as much of its precious metals as possible from secondary sources.