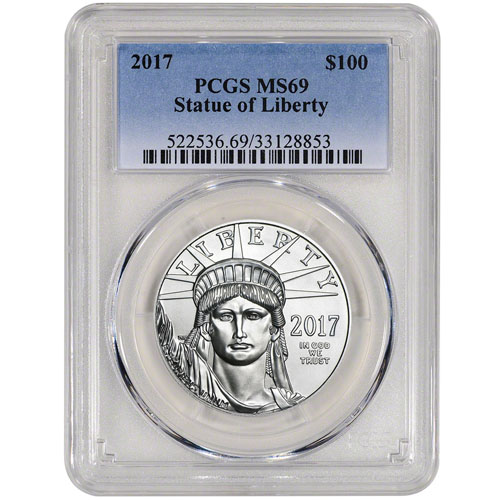 American Platinum Eagle coins debuted in 1997 from the United States Mint, making the 2017 release of the coin the 20th anniversary. However, the bullion coins have not been in production continuously throughout the past two decades. Lack of interest, at times, in platinum and limited supply have made the coins tough to produce regularly.

The Great Recession had a particularly significant impact on the Platinum Eagles. The bullion version of the coin was produced in four total weights regularly from 1997 to 2008. There would not be another bullion American Platinum Eagle struck after the 2008 issue until 2014, and only the 1 oz coin was available then. 2015 saw another stoppage, and the coins returned again in 2016.

On the reverse of the American Platinum Eagle coin is the image of an eagle in flight over the nation. The bird is depicted flying over a small outcrop of land below with the rising sun cresting over the horizon behind it. The rays of sunshine stretch about behind the bird as it glides in flight with its wings at full stretch.

The obverse of the 2017 1 oz American Platinum Eagle Coin features the face of Lady Liberty from the Statue of Liberty. This depiction focuses on her gaze as she looks out over the Atlantic Ocean, and it was created in 1997 for the series by John Mercanti, a former Chief Engraver for the United States Mint.

All 2017 1 oz American Platinum Eagle Coins in this listing are near-perfect specimens. The PCGS assigns a Mint State 69 grade to coins with full, original mint luster and a maximum of two minor flaws. These include minuscule hairlines or contact marks.

We encourage all JM Bullion customers to reach out to us with questions. You can contact our customer support team at 800-276-6508, connect with us online using our live chat, or simply send us an email with your inquiries.