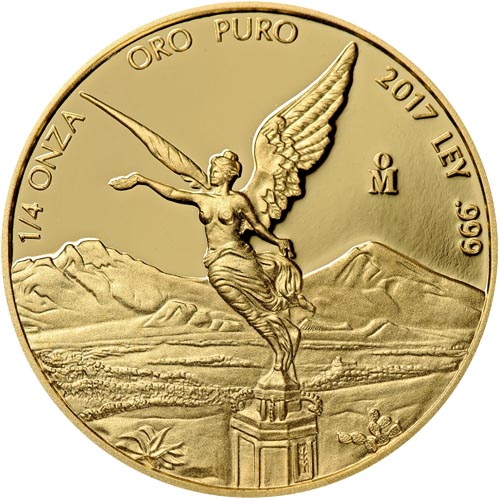 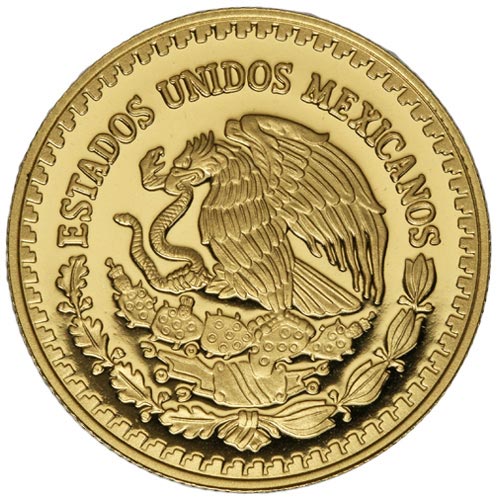 All Silver and Gold Libertad coins from the Mexican Mint have the same obverse and reverse design fields. While the obverse field is dominated by the image of Winged Victory holding up her signs of Mexican freedom from Spanish oppression, a tragic tale of love from the ancient Aztecs is found in the background.

Located just outside of Mexico City, the twin volcanic peaks depicted on the coins obverse background are named Popocatepetl and Iztaccihuatl. The former was a brave Aztec warrior sent off to battle by the father of the later. Iztaccihuatl was so distraught when she learned of Popocatepetls death, that she herself died. However, the rumors were not true and he returned to find her dead from heartbreak.

All 2017 oz Proof Mexican Gold Libertad Coins have historically significant images representative of Mexicos culture on the obverse and reverse. These images were first used on Mexican coinage with the introduction of the gold Centenario, available from 1921 to 1947 in original production.

The obverse of all 2017 oz Proof Mexican Gold Libertad Coins features a depiction of Winged Victory, known as the Angel of Independence to those who fought for the cause of Mexican freedom in the early 19th century. Her figure was erected in Mexico City atop the Independence Victory column in 1921 to mark 100 years of freedom.

On the reverse of the Proof Mexican Gold Libertad coins is the coat of arms for Mexico. There is a slight difference between fractional-weight designs and the 1 oz gold design. Coins such as the oz only have so much surface area, so the modern version of the coat of arms is all youll find on this side.

All Proof Mexican Gold Libertad coins are available to you inside of their original mint capsules. Each is a brilliant proof striking with visual contrasts between the design sets and background coming from the rough, matte finish of the designs and mirrored backgrounds.

We encourage JM Bullion customers to contact us at 800-276-6508 with questions. You can also reach out to us online through our live chat and email address.