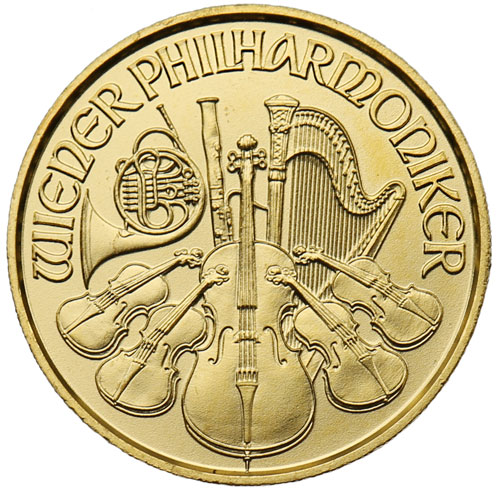 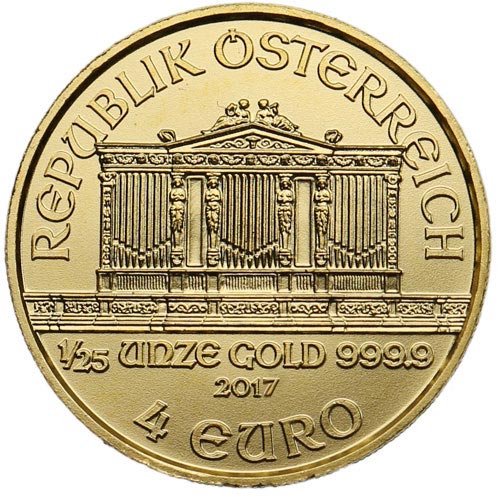 The Austrian Philharmonic Coin Series is one of, if not the most, popular coin programs minted on the European continent. Available in gold since 1989, these coins feature the same obverse and reverse designs each year. Today, the 2017 1/25 oz Australian Gold Philharmonic Coin is available to purchase from JM Bullion.

Each of the 2017 1/25 oz Austrian Gold Philharmonic Coins in this listing has a BU condition. Coins in BU condition show no signs of wear and tear on the surfaces, though you may notice minor flaws that include breaks in the luster, spotted surfaces, or contact marks as a result of striking during the production process.

On the obverse of the Austrian Gold Philharmonic coin is the image of the pipe organ found inside the Musikverein Golden Hall. Located in the Innere Stadt neighborhood of Vienna, it is home to the Vienna Philharmonic Orchestra.

The reverse of all 2017 1/25 oz Austrian Gold Philharmonic coins features a grouping of musical instruments used by members of the orchestra. These include a bassoon, cello, violins, and even a French horn.

Duke Leopold V of Austria founded the Austrian Mint in 1194 with a payment of 15 tonnes of silver from King Richard Lionheart of England, whose troops needed safe passage through Austria on their return from the Crusades.

Please don’t hesitate to contact JM Bullion with your questions. You can reach our customer service team on the phone at 800-276-6508, connect with us online through our live web chat, or send us an email.