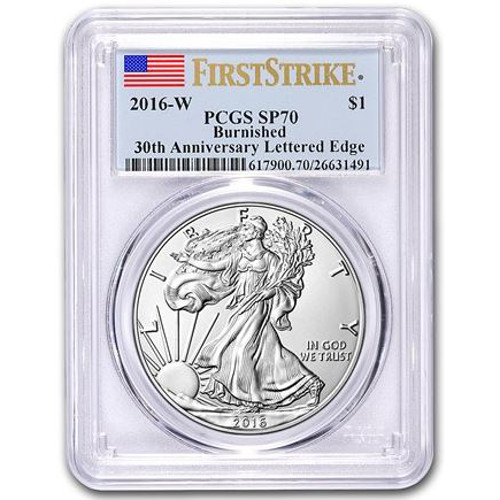 Each of the 2016-W Burnished American Silver Eagle coins in this product listing is a perfect specimen according to the PCGS. Coins with an SP70 grade from the PCGS have full, original mint luster and lack any detracting flaws on the surfaces. A First Strike coin is a product that arrived at the PCGS depository, or an authorized third-party location, within the first 30 days of the release date set by the United States Mint for 2016 products.

The American Silver Eagle originated as a means of making extra money for the federal government in 1986. Congress authorized the release of Defense National Stockpile stores of silver to produce an official bullion coin for the United States. Originally the coin was available in bullion and proof only.

On the obverse of each coin is Adolph A. Weinmans Walking Liberty design, which was created in 1916 during a revolutionary period in US coin design. Weinmans creation originally appeared on the Walking Liberty Half Dollar from 1916 to 1947.

Meanwhile, one the reverse of the coin is the heraldic eagle of the United States. The reverse design comes from then-US Mint Chief Engraver John Mercanti, who created the image in 1986 for this coin by modifying and modernizing a design that has been in use since 1794 on American coinage.

All 2016-W Burnished American Silver Eagle coins in this listing are from the West Point Mint in the United States Mint system, as indicated by the presence of a W mint mark on the coins.