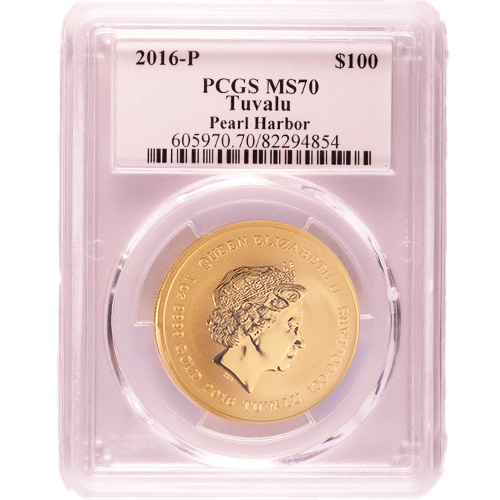 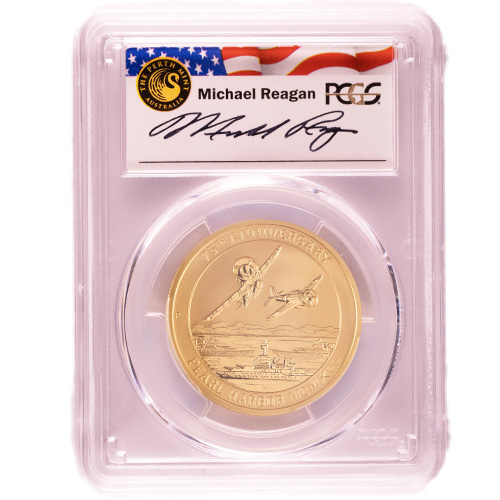 A “date that will live in infamy” as former President Franklin D. Roosevelt put it. On December 7, 1941, Imperial Japan launched a surprise attack at Pearl Harbor on the U.S. Navy Pacific Fleet located at Oahu, Hawaii. No one was prepared for this massacre, making it a truly dreadful day in United States history. This coin release for 2016 marks the 75th anniversary of this awful event, along with the entrance of the U.S. into World War II. Now, the 2016 1 oz Tuvalu Pearl Harbor Gold Coin can be purchased online from JM Bullion.

The 2016 1 oz Tuvalu Pearl Harbor Gold Coin was struck using 99.99% pure gold. This coin received a grading from the Professional Coin Grading Service (PCGS) and the Numismatic Guaranty Company (NGC) of MS70. This means that the coin is considered to be in perfect mint condition. Even if someone were to view the coin under 5x magnification, there would be no scratches or dents from wear and handling.

Coins ordered from this listing on JM Bullion will arrive with various label colors and designs in the plastic slab. We cannot guarantee whether the coin you receive will be graded by the PCGS or the NGC.

Just before 8 a.m., Imperial Japan closed in on Pearl Harbor and launched a historical attack on the United States Navy. While the U.S. Navy did sustain horrible losses that day, many of its aircraft carriers were not present at the time and, therefore, saved from the attack. The United States would soon enter World War II after the attack and eventually strike back at Japan.

The obverse of the 2016 1 oz Tuvalu Pearl Harbor Gold Coin shows the portrait of the late Queen Elizabeth II, designed by Ian Rank-Broadley. The image of Her Majesty has been used on bullion releases around the world from many mints, and is typically the featured obverse image on many coin products. The obverse of this 2016 release also shows the coin’s weight, purity, year of release, value, and country of origin.

The reverse of the 2016 1 oz Tuvalu Pearl Harbor Gold Coin shows two Japanese aircraft flying over Pearl Harbor. In the background, the viewer will notice battleships littering the sea. There are two inscriptions on this side of the coin: “75TH ANNIVERSARY” and “PEARL HARBOR MCMXLI”.

If you have any additional questions when buying gold, please contact our team at JM Bullion. We are available via email, online live chat, or by phone at 800-276-6508.