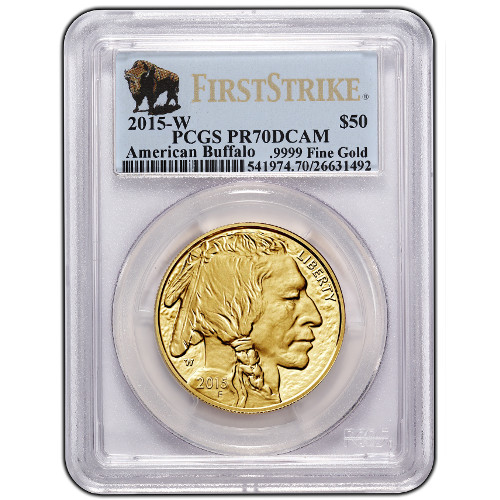 American Gold Buffalo coins were introduced by the United States Mint in 2006 to compete with the Canadian Gold Maple Leaf, perhaps the most popular 24-karat gold coin. The buffalo coins feature iconic imagery from the Indian Head nickel, designed in 1913 by James Earle Fraser.

The coins available in this product listing have a perfect PR70 grade from the PCGS. A perfect proof has its full, original luster and no blemishes, contact marks, or other detracting flaws. As part of the First Strike Series, these coins left the United States Mint in sealed boxes within the first 30 days of their release and made it to the PCGS facility.

A coin with a deep-cameo, or DCAM, designation features a strong, frosted design set overlaying a deeply mirrored, clear background. This finish creates a stark contrast between the design field and background field that gives the appearance of the design floating above the background.

On the reverse side of the American Gold Buffalo is Frasers depiction of Black Diamond, a resident bison at New York Citys Central Park Zoo in the early 20th century. The obverse side features the right-profile bust of a Native American chieftain, rumored to be a combination of facial features from three real-life Native Americans who sat for Fraser.

The United States Mint produces its American Gold Buffalo coins at the Denver Mint and West Point Mint. If you have questions for a JM Bullion associate, we encourage you to contact us at 800-276-6508, chat with us online, or send us an email.