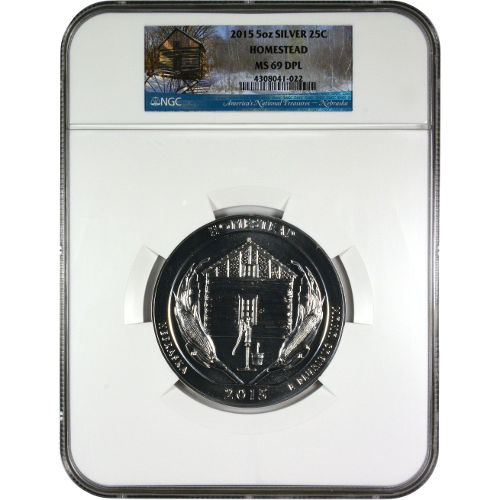 America the Beautiful coins are among the most anticipated annual releases from the United States Mint. Available as both bullion and proof specimens, these coins are inspired by the state quarters program the Mint released into circulation from 1999 to 2008. For a limited time, the 2015 5 oz ATB Homestead Silver Coin is available in near-perfect condition from JM Bullion.

Each of the 2015 5 oz ATB Homestead Silver coins offered today from JM Bullion has a near-perfect grade of Mint State 69 from the NGC. MS69 coins exhibit full, original mint luster, but also feature a maximum of two minor detracting flaws. These flaws are limited in nature and found outside the primary focal areas.

The Homestead Act of 1862 was signed by President Abraham Lincoln and opened lands west of the Mississippi River for settlement by American citizens. The goal was to help populate the lands in the west, and offered tracts of land to Americans at low prices so long as it was developed into productive property.

America the Beautiful silver coins are released in groups of five each year, with the first arriving back in 2010. The ATB Series will eventually feature a total of 56 coins representing all of the states in the US, as well as the federal district in the nations capital and the overseas territories of American Samoa, Marianas Islands, Guam, Puerto Rico, and the US Virgin Islands.

On the reverse is the image of all the factors needed in frontier life: shelter, food, and water. The obverse depicts the left-profile portrait of President George Washington, which was created in 1932 by John Flanagan and is used on the circulation quarter.

If you have any questions, please feel free to contact JM Bullion at 800-276-6508. Our associates are also available online using our live web chat and email features.