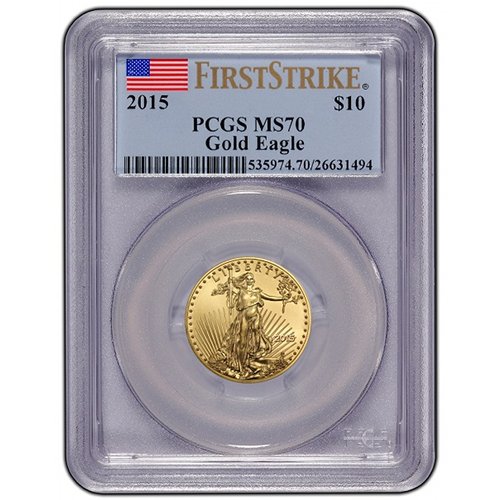 In 1985, the United States Congress authorized the launch of the American Gold Eagle coin program with passage of the Gold Bullion Coin Act. Featuring a design that dates back to 1907 and struck using only gold sourced from within the US, American Gold Eagle coins are sought after by numismatics everywhere for their high quality. Today, you can own a 2015 oz American Gold Eagle with a Professional Coin Grading Service grade of Mint State 70 courtesy of JM Bullion.

American Gold Eagle coins were first released in 1986, with four different weights available: 1 oz, oz, oz, and 1/10 oz. Since that first year, the bullion coin program has included all four weights. In 2014, the American Gold Eagle saw its mintage mintage reach some of the highest levels in the nearly 30-year history.

The 2015 oz American Gold Eagle coins available today feature a Mint State 70 grade from the PCGS. An MS70 grade is the highest that any coin can receive, and indicates a coin which has been perfectly struck. First Strike coins are those which were received by PCGS within the first 30 days of the coins release.

On the reverse side of the American Gold Eagle is the imagery which gives the coin its name. Sculptor Miley Busiek created the image for use on this coin program in 1986. In her image, a family of bald eagles is featured in its nest. The male eagle can be seen returning to the female and hatchlings in the nest with an olive branch in its talons. The obverse side features Augustus Saint-Gaudens image of Lady Liberty, as first designed in 1907.

Congress authorized construction of the US Mint following passage of the Coinage Act of 1792. Using various minting facilities throughout its history, the Mint relies on four major facilities today. New Yorks West Point Mint bears the primary responsibility for producing American Gold Eagles, though other facilities contribute to the production of special-edition coins.

If you have any questions for a JM Bullion associate, you can reach our staff members at 800-276-6508, online using our live chat, and via email.