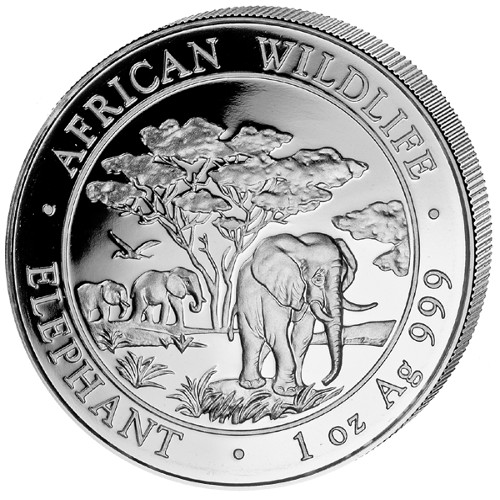 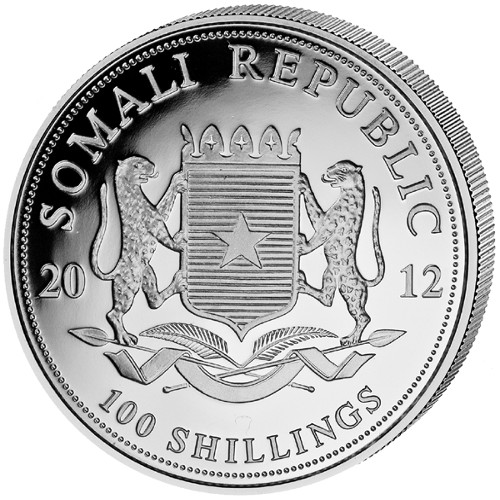 This 1 oz Somalia Silver Elephant coin was minted in 2012 and is available in Brilliant Uncirculated condition. Sold out at the mint, this particular date has experienced significant collector appreciation over the years. We have 2012 Somalia Elephant silver coins in stock and ready to ship in both singular quantities and mint-sealed tubes of 20.

The African elephant is the largest terrestrial creature in the world. Elephants are separated into two different sub-species. The bush elephant, more visible in human society, is known for its massive size and long tusks. Forest elephants are smaller than their cousins the bush elephant, but still rank as the third largest terrestrial creatures on the planet.

The African Wildlife Series celebrate the majesty and size of the African elephant, while also calling attention to the plight of the creatures in Africa. Elephants have been hunted to near extinction by poachers and big-game hunters in search of the prized ivory tusks on the animals. The Bavarian State Mint is responsible for striking these brilliant coins for the Republic of Somalia.

On the reverse side of the 2012 1 oz Somalia Silver Elephant is the depiction of the family of elephants. In the image, a male bull elephant is leading the family on a march across the savanna. In the background, a large tree rises up toward the sky as other elephants are visible in the background. The design used on the reverse side of Somalia Silver Elephant coins changes from year to year, making each coin in the series truly unique.

The obverse side of each coin bears the same image each year. The coat of arms for the Republic of Somalia is featured in the center of the coin. The depiction includes a single star set against horizontal lines on the face of the shield. On either side, the shield is supported by leopards.

The state-owned Bavarian State Mint is controlled by the Free State of Bavaria. The mints headquarters is located in Munich, Germany, and operates a state-of-the-art facility that has earned it the respect of refiners and collectors around the world.

If you have questions about the Somalia Silver Elephant coins, please feel free to contact a JM Bullion associate. We are available via the phone at 800-276-6508, or online using our live web chat and email services.