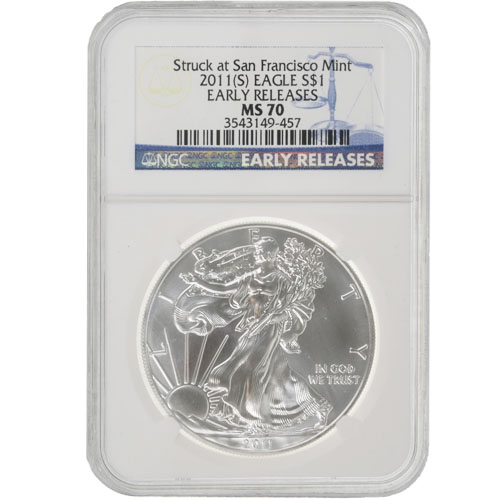 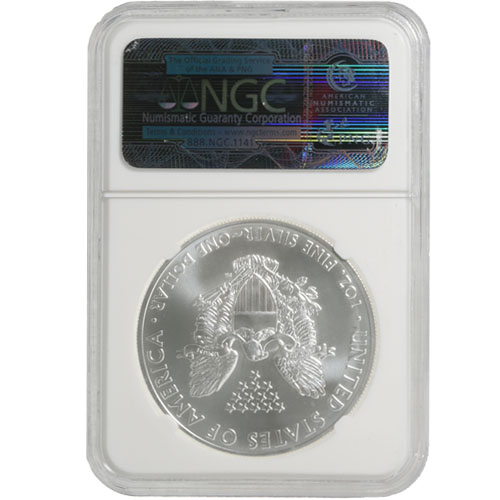 These 2011 American Silver Eagle coins mark a special moment of growth for the Silver Eagle program. From 1986 to 1998, the US Mint struck its 1 oz silver bullion coins at the San Francisco Mint. In 1999 and 2000, the coins had moved to the Philadelphia Mint before settling at the West Point Mint in 2001. In 2011, for the first time in 13 years, the coins were again struck at the San Francisco Mint.

All of these 2011-S 1 oz American Silver Eagle Coins earned perfect grades from the NGC. A Mint State 70 coin has full, original mint luster with no detracting flaws of any kind present on the design elements or surface areas. These coins also have an Early Release label, indicating that each was received by the NGC for certification within the first 30 days of its 2011 release.

On the obverse of 2011 American Silver Eagle Coins is Walking Liberty. This iconic design was created in 1916 by Adolph A. Weinman and featured on the Walking Liberty Half Dollar circulation coin until 1947.

It is important to note that these 2011-S American Silver Eagle Coins are bullion specimens and do not bear a mint mark. The San Francisco Mint began test striking Silver Eagles again in March 2011 and resumed greater production levels later in the year to supplement the West Point Mint production line amidst intense demand for the coins.

Please feel free to reach out to JM Bullion if you have any questions. You can call us on the phone at 800-276-6508, chat with us using our live chat service, or send us an email with your inquiries.