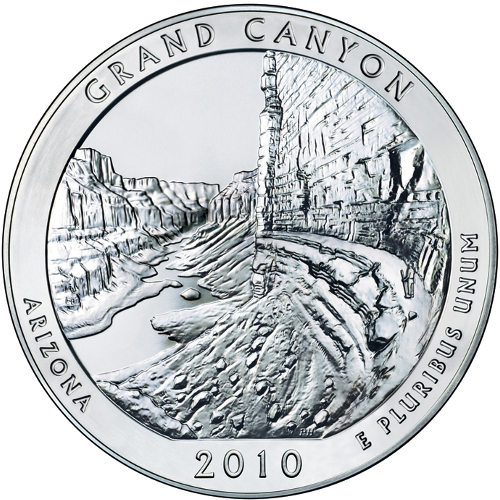 The 2010 5 oz ATB Grand Canyon silver coin is the fourth release of the US Mint’s storied America the Beautiful coin series. Each coin in this series features one of America’s many National Parks, few of which are more iconic than the Grand Canyon.

Reminiscent of a US Quarter, the obverse of the 5 oz ATB Grand Canyon silver coin features the profile image of George Washington. The sheer beauty of the coin is enough to attract collectors, but the 99.9% purity makes it a great investment vehicle as well.

The America the Beautiful coin series is one of the marquis offerings from the US Mint. With themes that commemorate iconic US landmarks and turning points in the country’s history, the America the Beautiful series does a great job of depicting our nation, its origins, and its natural beauty. On this particular coin, the awe-inspiring Grand Canyon is depicted in stunning detail.

Theodore Roosevelt, during his days in the Oval Office, had enough time to admire the natural beauty that exists throughout the entirety of the United States. Through his admiration of this beauty, he decided to champion what would eventually become our extensive, vast National Park System; the same system of National Parks that is the source of inspiration for this series of ATB coins.

On the coin’s reverse is a depiction of the Grand Canyon taken from a perspective that is within the Canyon itself. The imagery shows the curves and contours of the massive Canyon walls as well as the somewhat docile-looking Colorado River that, over millions of years, has helped carve out this natural wonder. Surrounding the central image are engravings with the words “Grand Canyon”, “E Pluribus Unum”, and “Arizona.” Additionally, there is a “2010” engraving, marking the year in which the coin was minted.

The obverse side of the coin is modeled to look identical to the obverse side of a US quarter. Complete with a quarter-dollar face value, “United States of America”, “Liberty”, and “In God We Trust” engravings, the coin’s obverse is an exact copy of the quarter dollar.

With a total mintage of just over 30,000, this particular ATB silver coin is often difficult for investors to obtain, thus increasing its intrinsic value. If you have any questions regarding the 5 oz ATB Grand Canyon silver coin or any of our other products, we encourage you to reach out to us toll-free 800-276-6508. You can also get in contact with our helpful customer service staff via live chat and email.