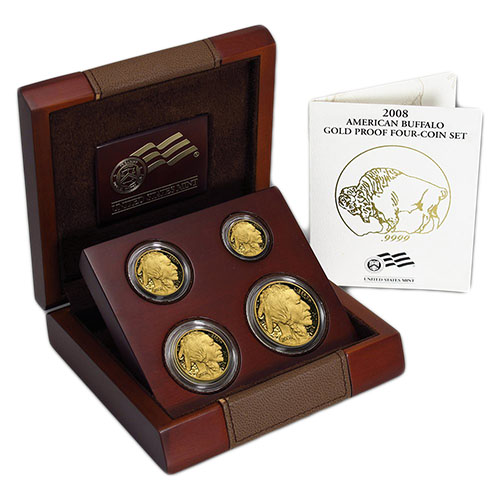 The American Gold Buffalo coin from the United States Mint is the only 24-karat gold coin issued in the United States on an annual basis. More importantly, it was the first coin ever issued by the US Mint with .9999 pure gold content. 2008 was a remarkable production year for the Gold Buffalo, with various options to choose from when buying gold. The 2008-W 4-Coin Proof American Gold Buffalo Set is currently available to you for online purchase with JM Bullion.

In 2008, the United States Mint built upon the early success of the Gold Buffalo bullion and proof coins. Released only recently in 2006, by 2008 the US Mint decided to introduce an uncirculated version of the Gold Buffalo with four fractional weights which it also made available in the proof series of coins.

However, the onset of the Great Recession and the subprime mortgage crisis sent markets tumbling and gold prices soaring. Legally obligated to meet the demand for gold bullion coin production, the United States Mint was forced to focus its gold blank reserves on the American Gold Eagle and American Gold Buffalo bullion coins.

On the obverse of all American Gold Buffalo coins is James Earle Frasers American Indian head design. Created in 1913, it featured on the nations five-cent circulation piece from 1913 until 1938.

The reverse of all 2008-W Proof American Gold Buffalo coins includes the image of an American bison. The largest land mammal to roam the American Plains and Midwest, the bison featured here is based upon Black Diamond, a bison living in captivity in New York Citys Central Park Zoo in the early 20th century.

All 2008-W 4-Coin Proof American Gold Buffalo Sets available here arrive in wooden display cases with a Certificate of Authenticity. The coins included are of 1 oz, oz, oz, and 1/10 oz weights and each contains .9999 pure gold content. The obverse of the coins bears the W mint mark of the West Point Mint as found on all Proof Gold Buffalo coins.

We encourage JM Bullion customers to contact us at 800-276-6508 with questions. You can also connect with us online through our live chat and email address.